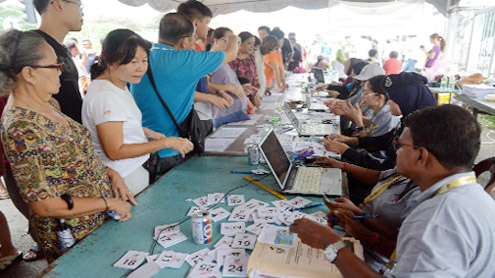 The commission said the ruling Barisan Nasional (National Front) coalition led by Premier Najib Razak secured 112 parliamentary seats, the threshold required to form a government in the 222-seat chamber.The announcement capped a fierce election battle Sunday in which Anwar’s three-party alliance had hoped to pull off a stunning win against the only government Malaysia has known.“Candidates representing Barisan Nasional have won 112 seats,” commission chair Aziz Yusof told a press conference.

Malaysians voted in record numbers in the general election but the hotly anticipated day was dogged by accusations of electoral irregularities.Informed of Barisan’s win, Anwar said he would not accept the result.“It is an election that we consider fraudulent and the EC has failed,” he told reporters.Voters had taken to the Internet in droves to accuse Najib’s government of trying to steal the election, as indelible ink that he touted as a guarantee against voter fraud was found to easily wash off.

The opposition also levelled a number of other accusations at the Election Commission — which it accuses of being in Barisan’s pocket.The commission said a record 80 percent of the multi-ethnic country’s 13 million registered voters — or more than 10 million people — had turned out.Najib’s 13-party Barisan Nasional (National Front) coalition had been favoured to barely keep power.But the charismatic Anwar, a one-time heir-apparent to leadership of Barisan, led Pakatan to historic gains in 2008 polls and the bloc was aiming for a landmark victory.

Pakatan has gained traction with pledges to end ruling-party corruption and authoritarianism, and to reform controversial affirmative-action policies for majority Malays that Anwar says are abused by a corrupt Malay elite.Najib has offered limited political reforms but a largely stay-the-course vision for the mainly Muslim nation.Voting was dominated by widespread complaints that indelible ink meant to prevent multiple voting was easily removed.

The opposition had already alleged numerous irregularities including a charge that tens of thousands of “dubious” and possibly foreign voters were flown to key constituencies to sway results. The government denies the charge.“Twenty to 30 seats were lost with very close majorities. We are exploring political pressure and all legal avenues,” a tired-looking Anwar said.But Najib pressed Pakatan to accept the result.

“For the sake of national interest, I ask all parties, especially the opposition, to accept this result with an open heart,” he told a press briefing.“Overall, the results show a trend of polarisation which worries the government. If it is not addressed, it can create tension or division in the country.”Anwar was deputy premier until his ouster in a 1998 power struggle with then-premier Mahathir Mohamad, and his jailing for six years on sex charges widely viewed as trumped up.