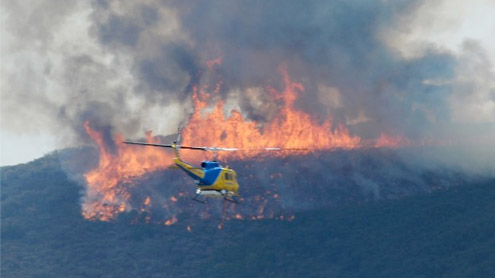 os Angeles: A Los Angeles-area wildfire exploded from 10 acres to 28,000 acres in less than a day and a half, and threatened 4,000 homes, fire authorities said Friday.

The fire, which began Thursday morning, damaged 15 homes,15 outbuildings and five commercial properties, but none were destroyed and no one had been injured, authorities said.Authorities ordered a mandatory evacuation Friday afternoon for the affluent Ventura County community of Hidden Valley, northwest of Los Angeles, the Ventura County Sheriff’s Office said. Evacuations remained in effect Friday evening for several other areas.Energized by dryness and strong winds, the wildfire raged for a second day and threatened 300 commercial properties and 50 outbuildings, authorities said.

A red-flag warning for high fire danger was due to high temperatures, low humidity and gusty winds.The so-called Springs Fire was nearly out of control in Ventura County. More than 950 fire and law enforcement personnel were able to contain only 20% of the blaze roaring near upscale houses and through the Santa Monica Mountains, the county fire department said.Federal funding was made available to cover 75% of firefighting costs, the Federal Emergency Management Agency announced.Meanwhile, another fire broke out on the other side of the urban area Friday, but that event was described as a brush fire, occurring in the suburb of Glendale.

“Fire nearly knocked down,” Glendale said on its Twitter feed late Friday afternoon after area agencies helped control the 75-acre blaze. Parts of two neighborhoods were evacuated.The Ventura County blaze, which was expected to reach the Pacific Ocean, crossed the scenic Pacific Coast Highway that separates the Santa Monica Mountains from the sea, and small fires damaged a military firing range, a Navy spokeswoman said.Several timber backdrops at the range were partially or completely burned, but because the facility sits in wetlands next to a lagoon, the fires weren’t a threat to Naval Base Ventura County at Point Mugu, said spokeswoman Kimberly Gearhart. Ammunition isn’t stored at the facility, she said.

“If something catches fire, it’s in the best possible (place) because it’s isolated and it’s near water,” Gearhart said. “Our biggest concern right now is smoke because it’s a very smoldering fire, and as the wind shifts, it either blows smoke toward or away from us.Evacuation orders were in effect in several areas on Friday, but officials lifted orders for the campus of California State University Channel Islands in Camarillo and for the Dos Vientos community in Newbury Park, authorities said.Authorities closed a 10-mile stretch of the Pacific Coast Highway just north of Malibu, the California Highway Patrol said. That closed section includes a portion where the naval base’s firing range is located.

The highway was expected to reopen later Friday, although many cross streets will remain closed.The highway between the ocean and the Santa Monica Mountains is among the most scenic drives in the Los Angeles area, but smoke rose from at least one patch on the coastal mountains.The fire began Thursday morning in Camarillo and traveled nine miles to the coast by Friday, fueled by low humidity and gusty Santa Ana winds, authorities said.Because of the smoke, ash and winds, people in affected areas were urged to be cautious and to avoid unnecessary outdoor activities, the Ventura County Air Pollution Control District said.

CNN meteorologist Chad Myers described the fire as a bad omen for California because the wildfire season isn’t supposed to start until August or September.Mountain chaparral and shrubs are dry because Los Angeles has received only half of its normal rainfall the past two years, Myers said. The vegetation is brown, instead of green from winter rain, he said.”Overall from a scale from one to 10, this fire’s a two compared to what we are going to see this fire season — millions of acres of wildland fires this season because the drought in the West is still in full swing,” Myers said.

In fact, the Los Angeles area has received less than 2 inches of rain since January, making the bone-dry region “definitely ripe for these fires,” said William Patzert, a NASA climatologist.”Normally at this time of the year we have May gray and June gloom, but because of the extreme drought and lack of rainfall, the entire Southwest, including Southern California, is in an incendiary situation,” Patzert said. “We just went up in flames.”Santa Ana winds are characterized as fast, dry blasts of air rushing down from the high desert and Great Basin. They typically blow in the fall, so this week’s Santa Anas are unusual, Patzert said.

“What we call Santa Ana winds or devil winds,” Patzert said, “are exceptionally dangerous.”Eight helicopters and six fixed-wing air tankers were dropping fire retardant on the blaze on Friday, Ventura County fire officials said.Crews battling the fast-moving wildfires were not expected to get relief.”Gusty Santa Ana winds will continue to bring extreme fire danger to the area through Friday,” the National Weather Service said. “Warnings are in effect for much of Los Angeles and Ventura counties through Friday afternoon, where there will continue to be a threat of rapid wildfire spread.”

Paul Whyte of Newbury Park said he panicked when he found his home surrounded by flames.Firefighters saved the home by diverting the blaze, although nine acres of shrubbery were scorched in the area, he said.”Your natural response is fear,” Whyte told CNN’s Piers Morgan. “I am glad my family is well and our house is still standing.”The blaze was among several that firefighters were battling in the Los Angeles area. Another one was east of the city in Riverside County. In that fire, firefighters made progress against flames that consumed more than 2,950 acres, a fire official said.The spread of the Summit Fire slowed Friday as crews contained 75% of the blaze, up from 40% from the previous day, the Riverside County Fire Department said. – CNN

U.S. believes Israel has conducted an airstrike into Syria

U.S. believes Israel has conducted an airstrike into Syria