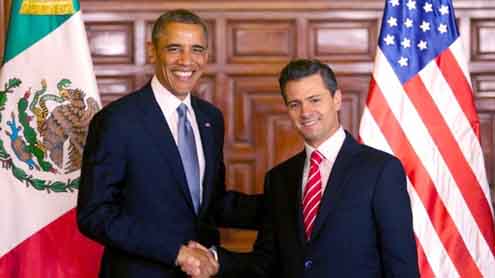 US President Barack Obama and his Mexican counterpart Enrique Pena Nieto have agreed to boost trade and create jobs on both sides of the border.

After talks in Mexico City, Mr Obama said illegal immigration to the US was at a historic low due to the strength of the Mexican economy.He also pledged to continue co-operation in combating drug-trafficking despite a shift in Mexico’s policy.Mexico wants to end the widespread access the US has to its intelligence.This is Mr Obama’s first visit to Mexico since Mr Pena Nieto took office in December 2012.

“I agreed to continue our close co-operation on security, even as the nature of that co-operation will evolve,” the US leader said at a joint news conference. For his part, President Pena Nieto played down notions that the recent shift meant less co-operation between the two countries.”There is no clash between these two goals.”Mexico’s Deputy Foreign Minister for North America, Sergio Alcocer, announced on Monday that an arrangement allowing US security agents unprecedented access to Mexican intelligence would come to an end.

All requests by the US security agencies would now have to be channelled through Mexico’s interior ministry, which controls security and domestic policy.Mr Alcocer insisted the new policy would improve co-operation rather than hamper it, but US analysts said the move could put an end to ties forged between agents on the ground.In Mexico City, Mr Obama also highlighted that an overhaul of the US immigration system was important for US-Mexican trade, which totalled $500bn (£322bn) in 2012.Mexico is the third largest trade partner of the US.

Getting Mexico’s backing on securing the 3,200km-long (2,000 miles) border could prove key for President Obama as he tries to sell his immigration reform to US politicians, analysts say.Bipartisan senators currently debating the reform have insisted that tough border security be in place before undocumented immigrants can gain legal status.A strong Mexican economy could also help cut down on emigration from Mexico, as workers do not feel the need to seek employment abroad.Last year, for the first time in four decades, about the same number of Mexican migrants returned home as arrived in the US, bringing net migration to zero, according to the Pew Hispanic Center.

The trend has been ascribed to tougher border controls and immigration laws on the one hand, and the US recession and a growing Mexican economy on the other.President Pena Nieto said the two leaders had agreed that the bilateral relationship be multi-themed – an inference that in recent years security concerns have dominated at the expense of economic and trade issues, the BBC’s Will Grant in Mexico City reports.Mr Pena Nieto said a deal had been reached to create a joint commission for the economy and bilateral trade, which would include US Vice-President Joe Biden and other senior officials.

A working group was also announced to support young entrepreneurs on both sides of the border as well as agreements on university education.To underline the strength of the bilateral relations, Mr Pena Nieto used former US President John F. Kennedy’s saying: “While geography has made us neighbours, tradition has made us friends.”However, the new tack on security combined with comprehensive immigration reform in the US will provide a strong test of that friendship, our correspondent adds. – BBC