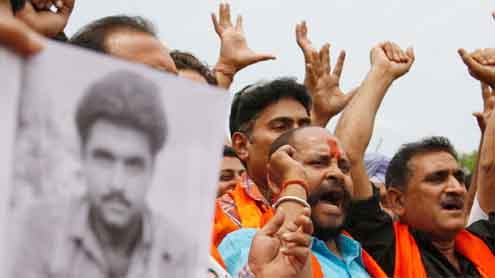 India reacted furiously to Thursday’s death in a Pakistani jail of an Indian farmer convicted of spying who was badly beaten last week by fellow inmates, the latest incident to strain relations between the neighbours.

Nuclear-armed India and Pakistan have fought three wars since the partition of British-ruled India in 1947, although they began a peace process in 2004. They remain deeply suspicious of each other.Sarabjit Singh was arrested in Pakistan in 1991 and sentenced to death for spying and carrying out four bomb blasts that killed 14 people. His family says he was an innocent farmer who was arrested after drunkenly wandering over the border.

Singh was hospitalized with a head injury on Saturday after two fellow prisoners attacked him in jail in the eastern city of Lahore. India’s government and his family had pleaded with Pakistan to let him return to India for treatment.“The criminals responsible for the barbaric and murderous attack on him must be brought to justice,” Indian Prime Minister Manmohan Singh said in a statement.“It is particularly regrettable that the government of Pakistan did not heed the pleas of the government of India, Sarabjit’s family and of civil society in India and Pakistan to take a humanitarian view of this case.”

Pakistan said it provided the best treatment for Singh, who it said had been comatose and on a ventilator following injuries sustained during a “scuffle” with fellow inmates.“A sustainable and long lasting relationship between two countries has to be between people. That relation has been hurt by what has happened today,” Indian Foreign Minister Salman Khurshid told reporters.The latest flare-up follows an outbreak of violence in the disputed territory of Kashmir in January, where two Pakistani and two Indian soldiers were killed. It was the worst clash there since India and Pakistan agreed to a ceasefire nearly a decade ago, leading to angry reactions from both sides.

Indian opposition parties and Sarabjit Singh’s family came down hard on the government for being too soft with Pakistan. Parliament was adjourned for two hours after MPs shouted anti-Pakistan slogans.“(The) centre is unable to give a strong answer to Pakistan’s inhuman acts. Beheading of our soldiers and now Sarabjit’s death are 2 recent examples,” Narendra Modi, a fiery nationalist opposition leader widely tipped as a prime ministerial candidate, wrote on Twitter.

Despite the recent strains, India and Pakistan’s relations have improved after nose-diving in 2008 when gunmen killed 166 people in Mumbai in a three-day rampage that India blamed on a Pakistani militant group. Last year, India hanged a Pakistani citizen convicted of taking part in that attack. – KahleejNews