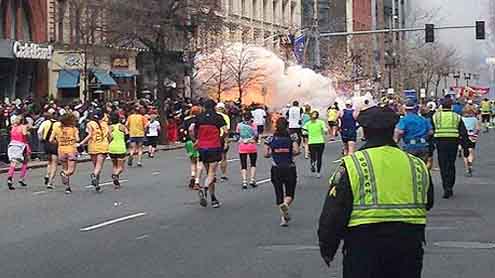 But they finished making the bombs more quickly than expected at Tamerlan Tsarnaev’s home, anonymous US officials are quoted as saying.It is unclear if they planned to target a specific event, but Boston hosts major 4 July festivities each year.Meanwhile, the body of Tamerlan Tsarnaev has been claimed by family.A spokesman for the Massachusetts Department of Public Safety confirmed a funeral home hired by his relatives picked up the remains on Thursday.

The suspect’s widow, Katherine Russell, gave consent a day earlier for the body to be released.His uncle Ruslan Tsarni, who lives in the state of Maryland, said on Tuesday night the family would take the remains.The medical examiner has said the older Tsarnaev brother’s cause of death has been determined, but the information will not be released until a death certificate has been filed. It was unclear if that had happened on Thursday evening.Tamerlan Tsarnaev, 26, died after a gun battle with police during which he was run over by his younger brother as he fled the scene in a vehicle, police have said.

Dzhokhar Tsarnaev, who was later captured and is recovering in a prison hospital from gunshot wounds, reportedly told FBI investigators of the plan for a 4 July attack.The 19-year-old also told interrogators that the two of them had initially considered suicide attacks, the New York Times reports.Instead they decided to use pressure-cookers to make the two bombs they allegedly detonated on 15 April near the finish line of the race, killing three people and wounding 264.Also according to the newspaper, Dzhokhar Tsarnaev told investigators he and his brother had listened to internet sermons by Anwar al-Awlaki, a US-born al-Qaeda suspect killed in a 2011 drone strike in Yemen.

The surviving brother faces a possible death sentence if convicted for his alleged role in the Boston attack.Tamerlan Tsarnaev lived with his wife and their young daughter in an apartment in Cambridge, Massachusetts. Police have said they found bomb material at the residence.The FBI has removed evidence, including DNA samples, from the Rhode Island home of Katherine Russell’s parents, where she has been staying since her husband’s death.

Her lawyers say she did not know much about her husband’s activities because she spent most of her time outside the home working as a health aide while he watched their child.Three of  Dzhokhar Tsarnaev’s college friends appeared in court on Wednesday, accused of obstructing the police investigation into the attacks.Police say Azamat Tazhayakov and Dias Kadyrbayev – both from Kazakhstan – threw away the suspect’s backpack after realising he was one of the bombers.Robel Phillipos, a US citizen, is accused of lying to investigators.The backpack was recovered at a landfill site. A lawyer for Mr Kadyrbayev told CNN his client had turned over the laptop to the FBI, but did not specify when. – BBC