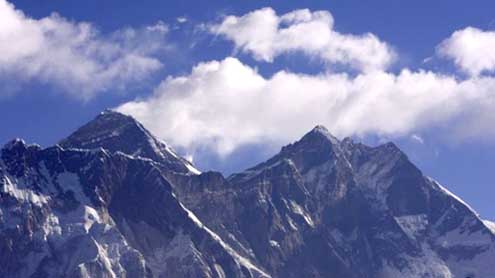 KATHMANDU: Nepal officials vowed on Monday to ensure the safety of climbers seeking to scale Mount Everest after three European climbers were involved in a fight with Sherpa guides on their way to the peak of the world’s highest mountain.

Three experienced climbers from Britain, Italy and Switzerland were on route to camp three at 7,000 meters (22,965 feet) on the 8,850 meters (29,035 feet) Everest summit when a brawl broke out on Saturday with Sherpas fixing their ropes.Witnesses said the Sherpas pelted the Europeans’ tents with stones and punches were thrown. Swiss climber Ueli Steck descended to the base camp after the attack and said he would abandon the climb and return to Kathmandu if proper security was not ensured.

Nepali officials were quick to respond after the unusual brawl on Mount Everest, which is a key source of income for impoverished Nepal as foreign climbers pay royalties to scale the world’s highest peak.Tourism Ministry official Dipendra Paudel said the government would ensure the safety and security of the climbers.”There was a slight misunderstanding and communication gap between them,” Paudel said in Kathmandu after contacting the base camp. “This has been sorted out and the climbers are at the base camp.”

He said the European climbers would resume their bid to climb Everest.Officials said hundreds of climbers from 32 expeditions and their Sherpas were on Mount Everest in the current climbing season which continues through May.Sherpas are locals from the Everest region and are noted for their climbing skills. They are responsible for fixing ropes and accompany most of the foreign climbers to the summit.Beni Hyoju, an official of the Cho-Oyu Trekking agency that organized the expedition, said the three European climbers had failed to comply with a request from their Sherpa guides to stay at a location while the guides fixed the route.

Hyoju said this made the Sherpas unhappy and they attacked the climbers. No one was critically wounded.”[Steck] has now agreed to continue the climb after local administration assured proper security,” Hyoju said. “Sherpas who were responsible for the fight will offer [an] apology.”Historian Elizabeth Hawley, who has been tracking foreign expeditions to Mount Everest for more than five decades, said this type of fighting on the mountain was rare.”I have not heard of any such incident before,” said Hawley.About 4,000 climbers have reached the top of Everest since it was first scaled by New Zealander Sir Edmund Hillary and Sherpa Tenzing Norgay in 1953. – VOA