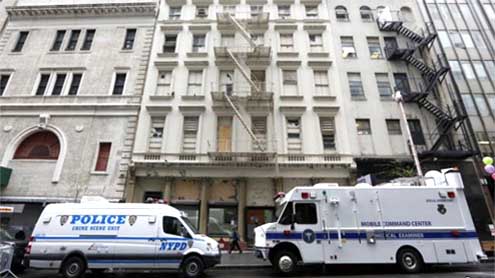 NEW YORK: Boeing Co. said it was confident that a piece of aircraft, found wedged between two buildings in lower Manhattan recently, came from one of two airplanes that struck the Twin Towers on Sept. 11, 2001.

Authorities are still trying to determine which of the two planes the piece of wreckage came from.A Boeing Co. representative confirmed to the New York Police Department that wreckage discovered last week, in a narrow alleyway behind 51 Park Place and 50 Murray Street in Manhattan’s financial district, “is believed to be from one of the two aircraft destroyed on September 11, 2001, but it could not be determined which one,” Paul Browne, NYPD’s chief spokesman, said on Monday.

The plane part, known as a trailing edge flap actuation support structure, comes from underneath the wing of the plane, not the landing gear, as was initially believed, Browne said in a statement Monday.The wreckage includes a “clearly visible” Boeing identification number, Browne said last week. It was wedged one story above ground level.Browne said the discovery of the piece, which measures about five feet high (1.5 meters) and three feet wide (0.9 meter), was made on April 24 by a construction crew inspecting the rear of the Park Place building.

Police secured the area between the buildings and treated it as a potential crime scene, Browne said.Nearly 12 years after two commercial airliners smashed into the two Manhattan skyscrapers, destroying them and killing nearly 3,000 people, city officials continue to turn up debris from the attack and to identify human remains.The NYPD is working with the New York City medical examiner’s office as it prepares to sift the soil around the site where the plane part was found for more evidence.

This month, the medical examiner’s office said 39 possible human remains were discovered in 9/11 debris hauled years ago to the New York City borough of Staten Island.Since 2006, the painstaking work has led to 34 new positive identifications of victims, according to CBS News. Around 1,000 families have never recovered any remains of their lost relatives.For some 9/11 victims’ families, the continuing discoveries of human remains and wreckage debris is a recurring reminder of the trauma they suffered as a result of the World Trade Center attacks.

“It’s been a form of torture for these New York families to find out, year after year, that more body parts, more remains have been discovered and identified,” said Debra Burlingame, a member of the 9/11 Memorial Foundation, whose brother Captain Charles Frank piloted American Airlines Flight 77, which was hijacked and struck the Pentagon in Washington, D.C. “And finding a piece of airplane wreckage makes them wonder, Maybe there’s a piece of my husband, or my brother, or sister or mom in those buildings that were never recovered.'”

Burlingame said she doesn’t fault the construction workers that found the most recent wreckage. Rather, she’s simply reminded again of all the grief, she said on Monday.”They have been haunted by these discoveries, year in and year out,” she said.The land surveyor who made the discovery told the New York Daily News that when he understood what he had stumbled upon, he was stunned.”I realized later – this is a piece of a murder weapon lying there,” surveyor Frank Van Brunt told the paper.Calls to Van Brunt were not immediately returned.