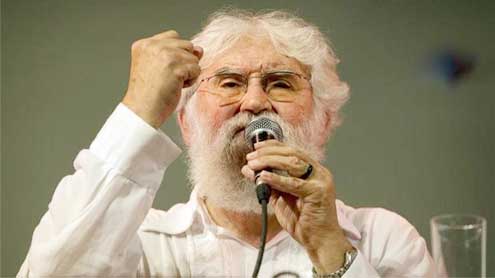 Argentina: A new pope from Latin America known for ministering to the poor in his country’s slums is raising the hopes of advocates of liberation theology, whose leftist social activism had alarmed previous pontiffs.

Prominent liberation theologian Leonardo Boff said Pope Francis has what it takes to fix a church “in ruins” and shares his movement’s commitment to building a church for the world’s poor.”With this pope, a Jesuit and a pope from the Third World, we can breathe happiness,” Boff said Saturday at a Buenos Aires book fair. “Pope Francis has both the vigor and tenderness that we need to create a new spiritual world.”

The 74-year-old Brazilian theologian was pressured to remain silent by previous popes who tried to draw a hard line between socially active priests and leftist politics. As Argentina’s leading cardinal before he became pope, Francis reinforced this line, suggesting in 2010 that reading the Gospel with a Marxist interpretation only gets priests in trouble.But Boff says the label of a closed-minded conservative simply doesn’t fit Francis.

“Pope Francis comes with the perspective that many of us in Latin America share. In our churches we do not just discuss theological theories, like in European churches. Our churches work together to support universal causes, causes like human rights, from the perspective of the poor, the destiny of humanity that is suffering, services for people living on the margins.”The liberation theology movement, which seeks to free lives as well as souls, emerged in the 1960s and quickly spread, especially in Latin America. Priests and church laypeople became deeply involved in human rights and social struggles. Some were caught up in clashes between repressive governments and rebels, sometimes at the cost of their lives.

The movement’s martyrs include El Salvador’s Archbishop Oscar Romero, whose increasing criticism of his country’s military-run government provoked his assassination as he was saying Mass in 1980. He was killed by thugs connected to the military hierarchy a day after he preached that “no soldier is obliged to obey an order that is contrary to the will of God.” His killing presaged a civil war that killed nearly 90,000 over the next 12 years.The case for beatification of Romero languished under popes John Paul II and Benedict XVI due to their opposition to liberation theology, but he was put back on track to becoming a saint days after Francis became pope.

Scores of other liberation theologians were killed in the 1970s and 1980s. Six Jesuit teachers were slaughtered at their university in El Salvador in 1989. Other priests and lay workers were tortured and vanished in the prisons of Chile and Argentina. Some were shot to death while demanding land rights for the poor in Brazil. A handful went further and picked up arms, or died accompanying rebel columns as chaplains, such as American Jesuit James Carney, who died in Honduras in 1983.

While even John Paul embraced the “preferential option for the poor” at the heart of the movement, most church leaders were unhappy to see intellectuals mixing doses of Marxism and class struggle into their analysis of the Gospel. It was a powerfully attractive mixture for idealistic Latin Americans who were raised in Catholic doctrine, educated by the region’s army of Marxist-influenced teachers, and outraged by the hunger, inequality and bloody repression all around them.

In the late 1960s and early 1970s, hundreds of Argentine priests were affiliated with a movement that proclaimed Christian teaching “inescapably obliges us to join in the revolutionary process for urgent radical change of existing structures and to reject formally the capitalistic system we see around us … We shall go forward in search of a Latin American brand of socialism that will hasten the coming of the new man.”

John Paul and his chief theologian, Cardinal Joseph Ratzinger, drove some of the most ardent and experimental liberation theologians out of the priesthood, castigated some of those who remained, and ensured that the bishops and cardinals they promoted took a wary view of leftist social activism.Yet much of the movement remained, practiced by thousands of grassroots “base communities” working out of local parishes across the hemisphere, nurtured by nuns, priests and a few bishops who put freedom from hunger, poverty and social injustice at the heart of the Church’s spiritual mission.Hundreds of advocates at a conference in Brazil last year declared themselves ready for a comeback.

“At times embers are hidden beneath the ashes,” said the meeting’s final declaration, which expressed hopes of stirring ablaze “a fire that lights other fires in the church and in society.”Boff and other advocates are thrilled that this new pope spent so much time ministering in the slums, and are inspired by his writings, which see no heresy in social action.”The option for the poor comes from the first centuries of Christianity. It is the Gospel itself,” said then-Cardinal Jorge Mario Bergoglio during a 2010 deposition in a human rights trial. He said that if he were to repeat “any of the sermons from the first fathers of the church, from the 2nd or 3rd century, about how the poor must be treated, they would say that mine would be Maoist or Trotskyite.”

Msgr. Gregorio Rosa Chavez, the auxiliary bishop of San Salvador, said Romero and Francis have the same vision of the church. “When he says ‘a church that is poor and for the poor,’ that is what Monsignor Romero said so many times,” he said.Rosa Chavez said neither was among the most radical of churchmen.”There are many theologies of liberation,” he said. “The pope represents one of these currents, the most pastoral current, the current that combines action with teaching.” He described Francis’ version as “theologians on foot, who walk with the people and combine reflection with action,” and contrasted them with “theologians of the desk, who are from university classrooms.”

John Paul II himself embraced the term “liberation theology,” but was also credited with inspiring resistance to the communist regime in his native Poland, and was allergic to socialist pieties.For 30 years, the Vatican has been seeding Latin America, Africa and Asia with cardinals “who have tended to be, adverse, to put it kindly, to liberation theology,” said Stacey Floyd-Thomas, a professor of ethics and society at Vanderbilt University Divinity School.In Brazil, Sao Paulo Archbishop Odilo Scherer, widely considered a possible pope, told the Estado de S. Paulo newspaper last year that liberation theology “lost its reason of being because of its Marxist ideological underpinnings . which are incompatible with Christian theology.”

“It had its merits by helping bring back into focus matters like social justice, international justice and the liberation of oppressed peoples. But these were always constant themes in the teachings of the Church,” Scherer said.In 1984, Ratzinger put Boff in Galileo’s chair for a Vatican inquisition over his writings, eventually stripping him of his church functions and ordering him to spend a year in “obedient silence.” Nearly a decade later, in 1993, the Vatican pressured him again, and he quit the Franciscan order.Now Boff says Francis has brought a “new spring” to the global church.”Josef Ratzinger. He was against the cause of the poor, liberation theology,” Boff said. “But this is from last century. Now we are under a new pope.” – YahooNews