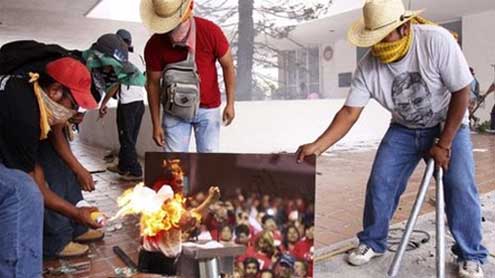 For several hours, masked protesters started fires and attacked the offices with pickaxes and sticks, spraying slogans on the walls.The state governor has called for support from the federal government.The reforms impose centralised teacher assessment and seek to end corrupt practices in the education system.Those practices include the buying and selling of teaching positions.

But unions say the reforms could lead to big lay-offs, and critics also suggest they may be paving the way for the privatisation of Mexico’s education system.Wednesday’s protests came a day after the Guerrero state legislature refused to amend the educational bill, which includes constitutional changes which must be passed by each state.Police stood by during Wednesday’s rampage in the state capital, Chilpancingo – though hundreds are guarding the state legislature.Dozens of protesters targeted the local headquarters of the governing party, the PRI, as well as the offices of the opposition PAN and PRD, which have supported the reforms.
‘Traitors’

A senator’s office and state education department building were also attacked by the demonstrators, who broke windows and tossed computer equipment, desks and chairs out of the windows.They burned papers inside the offices, some of which still had frightened workers inside when the masked men broke in, and sprayed slogans including “traitors of the people” on the walls.The teachers are part of the country’s smaller, more radical union, the National Co-ordinator of Education Workers.Union spokesman Minervo Moran said the violent protests were “a reaction to the aggressive policies that are being imposed by the reforms and that’s why there was this sort of action against the parties” that voted against the protesters’ proposals.

But state Governor Angel Aguirre called for federal back-up and the PRI chairman Cesar Camacho pledged to investigate the unrest.”We need to avoid the law of the jungle imposing itself, chaos and the breakdown of public order,” Mr Camacho was quoted as saying.Recently formed civilian self-defence groups are thought to have joined the demonstrators wreaking havoc on Wednesday, reports the BBC’s Will Grant in Mexico City.President Enrique Pena Nieto signed the education law in February, but parliamentarians need to draw up separate legislation to implement it. – BBC