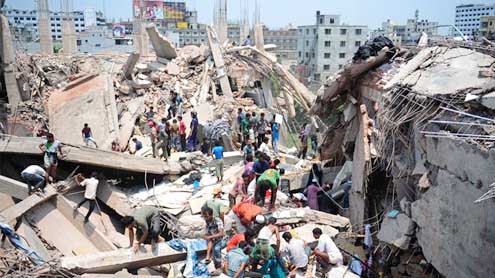 The death toll from a building collapse in Bangladesh rose to 149 as rescuers worked overnight to find people trapped in the rubble, authorities say.

Army Brigadier General Mohammed Siddiqul Alam Shikder said “many” people were still trapped and a clearer picture of the rescue operation would be available on Thursday afternoon.The eight-story building near Dhaka, housing mainly garment factories, collapsed on Wednesday.Workers had warned a day earleir that large cracks had developed in the structure.

Local police chief Mohammaed Asaduzzaman said police and the government’s Capital Development Authority had filed separate cases of negligence against the building owner.Searchers cut holes in the jumbled mess of concrete, passing water and torches to those pinned inside the building as rescue operations illuminated by floodlights continued through the night.The disaster came less than five months after a factory fire killed 112 people and underscored the unsafe conditions in Bangladesh’s booming garment industry, the second biggest in the world.

Workers said they had hesitated to go to into the building on Wednesday morning because it had developed such large cracks a day earlier that it even drew the attention of local news channels.Abdur Rahim, who worked on the fifth floor, said a factory manager gave assurances that there was no problem, so employees went inside.”After about an hour or so, the building collapsed suddenly,” Rahim said. He next remembered regaining consciousness outside.On a visit to the site, Home Minister Muhiuddin Khan Alamgir told reporters the building had violated construction codes and “the culprits would be punished”.

Prime Minister Sheikh Hasina has announced a national day of mourning for Thursday when flags will fly half-mast in memory of the victims.Only the ground floor of the Rana Plaza in the Savar district remained intact after the collapse.Fire crews said up to 2,000 people were in the building when it fell.Building collapses are common in Bangladesh. Many multi-storey blocks are built in violation of construction standards.In 2005, dozens were killed after a multi-storey garment factory collapsed in the same area. – AlJazeera