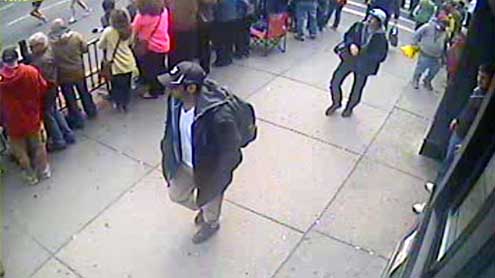 LONDON: The suspects in the bombings at the Boston Marathon were first identified from surveillance camera images. Debate about the use of the cameras has been ongoing for many years in Britain – a country with one of the highest densities of CCTV cameras in the world.

The FBI released color surveillance camera footage of the Boston bombing suspects three days after the attacks took place.  The video shows two men walking with rucksacks moments before the explosions.  They were quickly identified as Tamerlan Tsarnaev and his brother Dzhokhar.Former FBI Special Agent Peter J. Ahearn says surveillance cameras are one of the primary tools of investigation.”The first thing you do in any kind of a crisis in an area is you go for the tapes, you go for the video.  The ATM machines, anything on the street and there will be a team of investigators and analysts working that,” he said.

At the last count in 2007, there were 147 surveillance cameras operated by Boston city authorities and more than 400 on buses and subways.Some are calling for more cameras.  Among them is former mayor of New York Rudy Giuliani – who cited London as an example, describing it as a virtual “Hollywood studio” of surveillance.Surveillance or “CCTV” cameras from railway stations were crucial in identifying, within hours, the terrorists who attacked the London transport network in July 2005.

Conservative lawmaker Philip Davies is a strong advocate.”CCTV is an absolutely crucial tool for the security services and the police,” he said, “not just in identifying who was responsible for a crime after the event, but sometimes for actually identifying where people are to try to prevent those people who you have identified at source, knowing where they are so you can cut them off if they are trying something out.”

Estimates vary from around 1.8 million to four million surveillance cameras across Britain.”The debate should be about how do we prevent crime,” said Nick Pickles, from the organization Big Brother Watch, which campaigns for more privacy. “And if there is one thing that London as a city has proved, it is that CCTV does very little to deter criminals, it does very little to reduce crime levels, and when you have a major security incident like we tragically saw in Boston, CCTV is of very little use preventing these attacks happening.”

Londoners questioned by VOA were broadly supportive of CCTV.”A lot of crime nowadays is solved because of CCTV, so I am all for it,” said one man.”CCTV is a good thing.  But sometimes it depends on the situation.  Sometimes the police go too far,” said another man.Boston investigators noted the critical role of the public in identifying the suspects.”For more than 100 years the FBI has relied upon the public to be its eyes and ears,” explains Special Agent Richard DesLauriers from the FBI’s Boston division. “With the media’s help, in an instant these images will be delivered directly into the hands of millions around the world.” – VOA