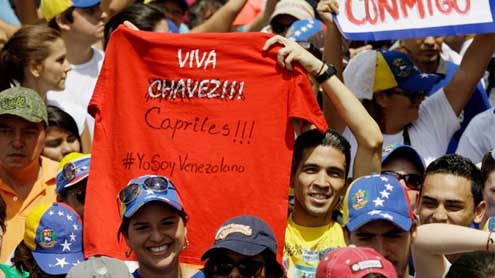 Venezuela:  The razor-close vote to replace late Venezuelan President Hugo Chavez has sparked what opposition leaders and human rights groups say is a government crackdown on public employees who either didn’t back Chavez’s hand-picked successor or failed to show sufficient support for the ruling party.

The April 14 election had revealed a major shift in public support away from the Chavez program as problems such as food shortages, soaring inflation and crime, as well as the absence of the late leader’s famous charm, led hundreds of thousands of Venezuelans to back the opposition for the first time since Chavez took power 14 years ago. It was an ominous start for successor Nicolas Maduro’s government, which is struggling to write the second chapter of the country’s socialist transformation amid deepening economic problems and widening divisions in a bureaucracy and public that once solidly backed Chavez.

Several high-ranking government officials have openly discussed punishing political disloyalty among government employees. On top of that, the human rights wing of the coalition opposition headed by Gov. Henrique Capriles says it has received more than 300 complaints of people being fired from government jobs on suspicion of having voted for leading opposition presidential candidate Capriles, who lost to Maduro by only 1.8 percentage points in official results. Another 1,000 or so public workers have complained about intimidation from supervisors and threats of punishment for supporting the opposition, the opposition’s rights office said.

Government officials did not respond to requests from The Associated Press for comment on the allegations, but some have told Venezuelan media that the charges are pure invention by the opposition and media outlets that back it.Those denials, however, conflict with a video posted on YouTube Saturday showing Housing Minister Ricardo Molina meeting with apparent co-workers and demanding complete political loyalty despite a legal prohibition against sanctioning workers for their political beliefs.”What the labor laws say doesn’t matter to me at all,” Molina exhorts, his voice soaring. “Zero tolerance. I don’t accept that anyone bad-mouths the revolution, that anyone bad-mouths Nicolas.”

He added: “They need to quit. Because if they don’t quit I personally will fire them.”It was unclear whether the video was taken surreptitiously, but the person who posted it did not respond to an AP request via YouTube seeking comment. Molina’s spokeswoman said Monday that his office would provide an official statement on the matter, but then did not, and did not answer repeated phone calls.

“It sounds like they are in some ways having difficulty holding it together, which is what you would expect with this weak showing of Maduro,” said Maxwell Cameron, director of the Centre for the Study of Democratic Institutions at the University of British Columbia. “Chavez was so critical both to maintaining the discipline internally within his coalition while at the same time being able to appeal broadly to the electorate.”

Odalis Monzon, a Chavista congresswoman in Vargas state just north of Caracas, said on Twitter she had started “looking through a magnifying glass” at people in her district, adding that aid will be cut to government workers found to have been challenging the election outcome — including through pot-banging protests called by Capriles.”The many who are here in the Social Missions and state institutions who are banging pots and pans, don’t even ask for cocoa beans,” read the Twitter account connected to her congressional webpage, using a colloquialism meaning that even the smallest request will be rejected.

Monzon’s office was closed Monday, and she could not be reached to respond to requests for comment.In another call to loyalty, Jose Rodriguez, secretary of a pro-government steelworkers union, appeared in another amateur online video calling for a blacklist similar to one created in 2004 by a Chavista congressman, Luis Tascon, that published the names of Venezuelans who supposedly signed a petition supporting a referendum that year seeking Chavez’s resignation.”Housecleaning! Housecleaning!” workers in the hall shout in the video.

Beginning on election day at least 10 officers, including generals and colonels, were detained and questioning, many held for more than 12 hours, without any charges filed, said Alonso Medina, a human rights lawyer and military law specialist. All were questioned at military intelligence headquarters about their loyalty to the Chavista government.       “What appears to be happening in the armed forces is a witch hunt against any and all officers who have not publicly expressed, along with their families, unconditional support for Mr. Maduro,” said Medina, who is representing many of the officers.

Delsa Solorzano, the opposition’s human rights coordinator, said she had received complaints about intimidation from workers at state enterprises including the oil company PDVSA, telecommunications firm CANTV and the offices of the ruling-party governors of Zulia and Vargas states.She said CANTV workers received calls from purported opinion pollsters, and those who spoke against the government were later told they could lose their jobs. She said some had been fired merely on suspicion of having voted for Capriles or participated in pot-banging protests.Solorzano said virtually none of the people who complained were willing to be identified because they feared further repression.

“Public employees have been accused, threatened or fired from their jobs,” Solorzano said. “Nicolas, put a stop to this, you can’t govern like this.”Ronny Andreina Mejias, a 47-year-old divorced mother of two, was one of the few public employees who have openly criticized the government.Having worked since last year in the Ministry of Penitentiary Services, she said she never concealed her opposition leanings. That included declining to pay a recommended donation of one day’s salary to Chavez’s socialist party despite a solicitation for a “voluntary” payment emailed by ministry officials, Mejias said.

On April 10, she said, her politics got her fired. A ministry spokesman, however, said her contract had simply expired and officials had decided not to renew it for reasons unrelated to her political stance. Mejias said she has appealed her dismissal to a state labor inspector.”I never at any time concealed my political allegiances and this was the great error that I made, not having gone to the marches, not having paid the day’s salary,” she said. “I’m the only support for the household.”

The stepped-up loyalty tests point to a government badly shaken by the close election results and desperate to consolidate its once mighty support.The ailing Chavez won by 11 percentage points in his final election last October, in which he handily defeated Capriles. Just six months later, Maduro won by less than 2 percentage points against the same candidate, despite polls conducted shortly after Chavez’s death showing Maduro with a double-digit lead. Meanwhile, Capriles added 711,344 votes to his total between the two elections.Capriles claims Maduro only won through voter intimidation and fraud. The government has agreed to audit the 46 percent of the vote that wasn’t hand-checked on election night, but officials have said there is no chance the final result will be affected.

A dozen voters interviewed across the country repeated the same explanation for their first opposition vote: anger at food shortages, electrical blackouts, government corruption and inefficiency and a personal dislike for Maduro, a former foreign minister who talks constantly about Chavez but doesn’t share his mentor’s charisma, talent for public speaking or long list of projects and proposals for improving Venezuela. Another factor: dissatisfaction over the luxurious lifestyles of high-ranking government officials who drive high-end cars and live in upscale neighborhoods, despite their purported socialist ideas.

“I’ve seen changes, yes, they’ve made changes, but I’ve also seen plenty of problems,” said Jorge Barrios, a 51-year-old truck driver in the small city of Tacarigua about 1 ½ hours north of the capital. “You never used to have to get in line to buy milk, to buy sugar. You could always get butter, oil, sugar. Now you have to wait three or four hours in line, or you can’t even get sugar, oil or coffee.”

The interviewed voters acknowledged that the country’s many problems began under Chavez but blamed lower-level government officials in his United Socialist Party of Venezuela. They said they had also maintained faith in Chavez’s ability to remake the country as a socialist utopia where the wealth of the state was distributed fairly among all Venezuelans.”Chavez had economic projects, projects to improve production, an education project,” said Miguel Marcano, an electrical technician from Valencia. “We never knew much about Maduro. I don’t know what he’s like as a leader.”