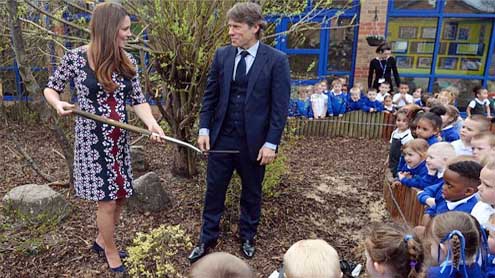 The Duchess of Cambridge yesterday visited an inspirational sink-estate school which suffered devastation after it was attacked by arsonists just hours after news of her trip was announced.

The Willows Primary School on Manchester’s deprived Wythenshawe estate – which is used as a backdrop for the Channel 4 comedy drama Shameless – has been held up as a beacon of hope and is now rated by Ofsted as Outstanding.But on April 11 the school’s new £40,000 playground was torched by vandals, razing an enormous climbing frame known as ‘The Fort’ to the ground.The crime was a huge blow to teachers, parents and children who had just found out that they would be receiving an official visit by the 31-year-old royal.

Fortunately, however, the community has rallied round in a remarkable way, working round the clock to rebuild the playground in time for the royal visit.The Duchess, who is more than six months pregnant, was wearing a floral Erdem dress and blue suede heels, as she was greeted by hundreds of excited young children cheering and waving the national flag of England in honour of St George’s Day.Kate immediately went into a 40 minute private briefing with some of the children who have sought help and their counsellors.

Among those greeting her were star pupil Chloe Pomfret, ten, who presented a posy of roses and school ‘executive dog’ King Charles Cavalier Henry  who was wearing a glittering union flag bow and presented a gorgeous gift hamper for William and Kate’s dog, Lupo. The Duchess appeared particularly delighted with Lupo’s hamper and asked what was in it. ‘Henry , you have gone to so much trouble,’ she laughed.Her blossoming bump was still small but much more visible in the £1.065 Sophia Visconti-bloom silk dress by Canadian designer Erdem.

Stylish Kate teamed the dress with navy suede heels and a boxy clutch bag.Kate’s visit yesterday was designed to highlight a new school counselling programme called M-PACT, which is a partnership between the Duchess’ own Royal Foundation (which she co-chairs with Prince William and Prince Harry), Comic Relief, Place2Be and Action on Addiction. Kate recently agreed to become patron of the latter two organisations.M-PACT (Moving Parents And Children Together) is designed to provide support for children affected by parental drugs or alcohol abuse.

Research suggests that more than a million youngsters nationwide are living in homes where their parents’ addictions have had a hugely detrimental impact on their lives and education.For many children school can actually offer a positive, consistent environment, which can play a vital role in helping to overcome their difficulties at home.After her private meetings, the Duchess gave a short speech in which she spoke passionately about the issue of addiction.

She said: ‘Addiction is a hugely complex and destructive disease and its impact can be simply devastating. All too often, lives and families can be shattered by it. Through my Patronage of Action on Addiction, I feel fortunate to have met a wide range of inspirational people who have overcome addiction. It is so encouraging to see that with the right help – like that of Action on Addiction – it can be conquered.’

She continued: ‘But those who are addicted are not the only victims. I have been struck by the profound and deeply damaging impact it has on the children of affected parents. ‬‪Research has shown that children of those who are addicted are seven times more likely to have addiction problems themselves. They are also brought up surrounded by fear.Last year, I asked The Royal Foundation, which I share with William and Harry, to see what could be done to help these children. In partnership with Comic Relief, our Foundation commissioned a piece of research to explore this issue. Today, it gives me an enormous feeling of pride and excitement to launch a programme that will bring this research to life.‬‪

‘Action on Addiction’s M-PACT programme delivers life changing and expert support to families affected by addiction. The Royal Foundation has simply brought these two outstanding charities together to deliver a programme that will ensure that many children living with addicted parents will be identified, supported and guided to look towards a positive and hopefully, addiction free future.’I would like to thank The Royal Foundation for all that they have done to make this happen. Thank you also to Comic Relief, Place 2 Be and Action on Addiction for working so brilliantly with them. ‬‪The cycle of addiction needs to be broken. My hope is that through this specialist and targeted delivery of care, these children will have the best possible start in life – the one that they deserve.‬‪‬‪’

Afterwards comedian and Comic Relief ambassador John Bishop gave a moving speech about the affect of addiction on young children but couldn’t resist opening with a wise crack about being a Liverpudlian being brought to Manchester after their home team had won the Premier League for the 20th time with, he joked, ‘the Duchess as a warm up act’.The Willows, which has been open since 1999, has around 430 pupils and has been labelled outstanding by Ofsted for the last seven years.

Head teacher Anne Whitehead said of the vandal attack: ‘It was such a shame as the school has been so inspirational that there hasn’t been any trouble for many, many years. But the way the community has rallied round has been remarkable and so heartening. We have received so much in the way of donations that we are going to be able to build an extension to the playground which is marvellous.’Before she left the Duchess went to the nursery class where she was presented with a willow tree for her garden at Kensington Palace and planted an identical one for the children.

She was also given a large A3 book the children had written entitled: ‘What do princesses do?’ate read a few excerpts out from it. ‘Eat bananas? Yes I certainly do that. Dancing, yes that too. Eat sweets. Yes I like all those!’Kate was first to ceremonially wield a shovel-full of dirt as John Bishop joked: ‘I can’t believe you have got a pregnant woman shovelling dirt like this why I am standing around.’Pinned to the wall were several sweet drawings of Kate and her husband created with crayons by the children. Some had also written a few words about the Duchess to describe her saying: ‘Her hair is brawn (sic), she works in a charity headquarters, she has lovely shoes, she plays hockey.’

Afterwards Mr Bishop said: ‘I think it is great that the royals are tackling raw, ugly, dirty and difficult issues such as addiction. They could spend their time and money on the National Theatre and no-one would think anything wrong with it. But this is about people shooting up in toilets. It goes against type and it is fantastic. Addiction is harrowing for all those involved,’ he said.While it had not been possible to rebuild the climbing frame in time for Kate’s visit since the arson attack, an army of volunteers wielding buckets and brooms had helped to clear up the area for yesterday’s engagement while a local business, Creative Play, re-laid a new surface so there was no sign of the fire that wreaked such devastation.

‘We’re determined to rebuild the fort with the help of the local community and others and have had offers already from companies wanting to help us with this,’ said head teacher Ann Whitehead.‘We were all devastated when we heard about the fire. But we’re not going to let them beat us.‘The response has been so overwhelming and restored my faith. People just turned up out of nowhere to help clear the place up. – DailyMail