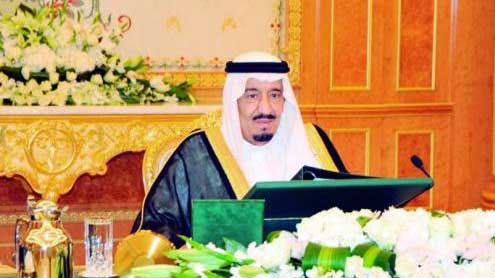 Saudi Arabia condemned the bombings in Boston and in Iraqi cities recently, stressing the need for the international community to take strong stand against terrorist attacks.

“The international community is required to take a determined stand against all acts of violence and terror whatever might their source be and bring an end to the dastardly acts that target innocent people with the least consideration of humanitarian values,” Minister of Culture and Information Abdul Aziz Khoja said in a statement to the Saudi Press Agency yesterday.Crown Prince Salman, deputy premier and minister of defense, chaired the weekly Cabinet meeting at Yamamah Palace.

“The Cabinet welcomed the joint statement issued by the meeting of the G20 finance ministers and central bank governors held on the sidelines of the World Bank and the International Monetary Fund meetings in Washington, in which the Kingdom also participated.The statement said ensuring continued financial stability in advanced economies is essential and urgent for the global economic growth,” Khoja said.The Cabinet also lauded Custodian of the Two Holy Mosque King Abdullah’s recent orders to provide citizens with developed residential land and loans for building houses and to take immediate steps to end the cement shortage in the country, Khoja said.

The Cabinet commended the efforts of the Istanbul meeting of the Friends of Syria, which discussed the ways to provide support to the Syrian opposition.The Cabinet also commended the opening of the 4th International Exhibition and Conference on Higher Education, which was organized by the Ministry of Higher Education with the participation of Arab and international universities and institutions, as well as 51 Saudi universities and institutions of higher learning.

Khoja added that the Cabinet transferred the authority of the Saudi Aviation Club from the Ministry of Defense to the General Authority for Civil Aviation. The Cabinet also authorized the minister of foreign affairs to sign a draft on general cooperation between the Kingdom and Afghanistan, Khoja said.Another decision taken by the Cabinet was the renewal of the memberships of five members of the board of directors of the Saudi Red Crescent Authority for three years. The members are Abdullah Al-Asheikh, Salem Al-Malik, Khalaf Al-Shammari, Abdul Aziz Abu Bakr and Fayiz Mushabeb. Muhammad Al-Zahrani and Rashid Al-Eid will be its new members.

The minister said the Council of Ministers also decided to appoint Undersecretary of the Ministry of Social Affairs for Social Security Muhammad Al-Oqla, as representative of the Ministry of Social Affairs in the Saudi Credit and Saving Bank.The Cabinet approved the adoption of a decision of the Supreme Council of the Gulf Cooperation Council in December 2011 on the law governing the use of recycled sewage water in the GCC countries as a guidance law for two years.

The Cabinet endorsed the international convention concerning minimum age for admission to employment, adopted by the International Labor Organization in 1973.The Cabinet also approved the appointments of Abdullah Al-Jarbou as planning adviser at the Ministry of Economy and Planning, Muhammad Al-Muhanna as legal adviser at the General Presidency of the Commission for Promotion of Virtue and Prevention of Vice, Ayad Al-Shammari as assistant undersecretary of the Hail governorate, Ahmed Al-Mazrou as secretary-general of the Anti-Narcotic Committee at the Ministry of Interior and Abdul Aziz Al-Hudhaili as assistant undersecretary for budget affairs at the Ministry of Finance. – ArabNews