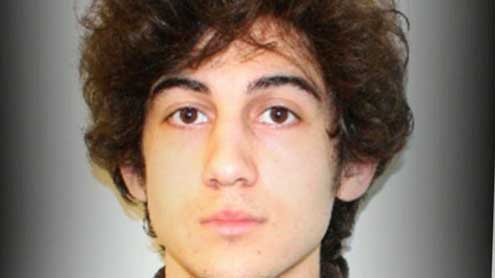 Boston Marathon bombing suspect Dzhokhar Tsarnaev has told investigators his older brother Tamerlan was the driving force behind last week’s attack and that no international terrorist groups were behind them, a U.S. government source said Monday.

Preliminary interviews with Tsarnaev indicate the two brothers fit the classification of self-radicalized jihadists, the source said. Dzhokhar Tsarnaev, wounded and held in a Boston hospital, has said his brother — who was killed early Friday — wanted to defend Islam from attack, according to the source.The government source cautioned that the interviews were preliminary, and that Tsarnaev’s account needs to be checked out and followed up on by investigators.

And a federal law enforcement official told CNN that while investigators have seen nothing yet to indicate the suspects were working with anyone else, a lot of work remains before they can say confidently that no others were involved. That official would not comment on any motive or specifics on what Dzhokhar Tsarnaev has communicated to officials.

The 19-year-old has been charged with using and conspiring to use a weapon of mass destruction resulting in death, and one count of malicious destruction of property by means of an explosive device resulting in death. He was heavily sedated and on a ventilator at Beth Israel Deaconess Hospital, but was “alert, mentally competent and lucid” during the brief initial court appearance at his bedside on Monday, U.S. Magistrate Judge Marianne Bowler found.During the hearing, Tsarnaev communicated mostly by nodding his head, though he once answered “No” when Bowler asked him if he could afford a lawyer, according to a transcript of the proceeding. A public defender was appointed to represent him.

Investigators have been asking Tsarnaev whether there are more bombs, explosives caches or weapons beyond those already found by police, and if anyone else was involved in the attacks, a source with first-hand knowledge of the investigation told CNN. Investigators are going into Tsarnaev’s room every few hours to ask questions in the presence of doctors, the source said.

Federal agents at first questioned Tsarnaev without reading him his Miranda rights, under an exception to the rule invoked when authorities believe there is an imminent public safety threat, a Justice Department official said over the weekend. But by the time of the hospital room proceeding, government sources said he had been read his rights, and Bowler reviewed those with him again Monday.

Bowler scheduled a probable cause hearing for May 30.Tsarnaev had been shot in the head, neck, legs and one hand, according to an FBI affidavit supporting the charges. He had lost a lot of blood and may have hearing loss from two flash-bang devices used to draw him out of the boat, the source said.It wasn’t clear whether Tsarnaev was wounded during his capture Friday night or in an earlier shootout with police that left his 26-year-old brother dead. Boston Police Commissioner Ed Davis said the brothers — armed with handguns and explosives — apparently were planning another attack before the shootout disrupted their efforts.

“I believe that the only reason that someone would have those in their possession was to further attack people and cause more death and destruction,” Davis said on CNN’s “Starting Point” Monday.Investigators are also trying to determine whether anyone else was involved in the bombings. But Davis, speaking Sunday to CNN’s Don Lemon, said that he was confident that the brothers were “the two major actors in the violence that occurred.”

“I told the people of Boston that they can rest easily, that the two people who were committing these vicious attacks are either dead or arrested, and I still believe that,” he said.Meanwhile, after a week of combing the downtown thoroughfare where the bombs went off for evidence, federal authorities handed control of Boylston Street back to the city. But the blocks around the bomb sites remain closed to the public while Boston officials clean up the area and make sure the buildings are safe to occupy.

“This area will be opened up to businesses over the next few hours, and then the people will be back here in a day or so,” Davis said. “And they will be walking up and down this street, and the terrorists will understand that they can not keep us down.”A police honor guard, accompanied by a bagpiper, lowered the flag that had flown at the finish line of last week’s marathon and presented it to Mayor Thomas Menino to mark the occasion. Shortly afterward, workers in bright yellow suits began hosing down and scrubbing the sidewalks around the second bomb site.

Among the pieces of evidence collected from Boylston Street during the past week was a tree that Dzhokhar Tsarnaev may have leaned against before the bombing, according to a source who receives regular intelligence briefings on the Boston bombings. The source said the tree — located at the site of the second blast — was removed along with the surrounding grate, where the explosive device’s circuit board was found.

The decision to charge Tsarnaev in civilian court put an end to speculation that he would be charged as an enemy combatant, a designation sometimes used against terrorists. White House spokesman Jay Carney said that Tsarnaev is a naturalized U.S. citizen and cannot be tried by a military commission.Trying Tsarnaev in civilian courts — like “hundreds of terrorists” to date — is “absolutely the right way to go and the appropriate way to go,” Carney said. “We have a long history of successfully prosecuting terrorists and bringing them to justice, and the president fully believes that that process will work in this case.”

That disappointed Sen. Lindsey Graham, R-South Carolina, who has been calling for Tsarnaev to be handed over to U.S. intelligence as an “enemy combatant.””There is ample evidence here on the criminal side,” Graham said. “A first-year law student could prosecute this case. What I am worried about is, what does this individual know about future attacks or terrorist organizations that may be in our midst? We have the right to gather intelligence.”Graham also said there was also “ample evidence” that the bombings were “inspired by radical ideology.”

But while Tamerlan Tsarnaev apparently became increasingly radical in the past three or four years, according to an analysis of his social media accounts and the recollections of family members, there was no evidence Monday that he had any active association with international jihadist groups.Tamerlan Tsarnaev, 26, died after a shootout with police early Friday. Dzhokhar Tsarnaev was captured that night, after police found him hiding in a boat in the back yard of a house in the Boston suburb of Watertown, Massachusetts.

With one suspect dead and the other hindered in his ability to communicate, investigators are eager to speak to Tamerlan Tsarnaev’s wife, Katherine Russell, to see what she might know about incidents leading up to the bombings.On Monday, her attorney said she learned of her husband’s alleged involvement through news accounts.”She knew nothing about it at any time,” Amato DeLuca said in response to questions about whether Russell knew of plans to attack the marathon.Tsarnaev stayed home and cared for the couple’s 2-year-old daughter while his wife worked long hours as a home-care aide, according to DeLuca.

The family is devastated, the attorney said.”They’re very distraught. They’re upset. Their lives have been unalterably changed. They’re upset because of what happened, the people that were injured, that were killed. It’s an awful, terrible thing,” he said. “And of course (for) Katy, it’s even worse because what she lost — her husband and the father of her daughter.”Clues about radicalization?

The Tsarnaev family hails from the Russian republic of Chechnya and fled the brutal wars there in the 1990s. The two brothers were born in Kyrgyzstan; Dzhokhar became a U.S. citizen in 2012, while Tamerlan was a legal U.S. resident.An FBI official said agents interviewed Tamerlan Tsarnaev in 2011 at the request of the Russian government. The FBI said Russia claimed that he was a follower of radical Islam and that he had changed drastically since 2010.But the Russian government’s request was vague, a U.S. official and a law enforcement source said Sunday. The lack of specifics limited how much the FBI was able to investigate Tamerlan, the law enforcement official said.

In August 2012, soon after returning from a visit to Russia, the elder Tsarnaev brother created a YouTube channel with links to a number of videos. Two videos under a category labeled “Terrorists” were deleted. It’s not clear when or by whom.Tamerlan Tsarnaev attended prayers periodically at the Islamic Society of Boston’s mosque in Cambridge, a board member told CNN’s Brian Todd. In a statement issued Monday, the society said he twice interrupted sermons — once in November to express his opposition to celebrating any holiday as un-Islamic, and once in January when he tore into the preacher for citing civil rights leader Martin Luther King.

The second time, the congregation shouted back, “Leave now,” the statement said.”After the sermon and the congregational prayer ended, a few volunteer leaders of the mosque sat down with the older suspect and gave him a clear choice: either he stops interrupting sermons and remains silent or he would not be welcomed,” it said. “While he continued to attend some of the congregational prayers after the January incident, he neither interrupted another sermon nor did he cause any other disturbances.”Tamerlan Tsarnaev “began coming intermittently to our congregational prayers on Friday over a year ago and occasionally to our daily prayers,” the statement read. “The younger suspect was rarely seen at the center, coming only occasionally for prayer.”

One of the victims, Krystle Campbell was memorialized Monday morning in a service at St. Joseph Catholic Church in Medford, Massachusetts. After the service, police officers lined the street in front of the church as other officers wearing dress uniforms saluted as the casket bearing her remains was taken from the church and loaded into a hearse.Another memorial service was scheduled Monday night at Boston University for Lingzi Lu, a student from China. Lu was a graduate student in mathematics and statistics. Before coming to Boston, she won an academic scholarship to the Beijing Institute of Technology, where she received accolades for her math skills.

On Wednesday, Vice President Joe Biden will attend the memorial service for MIT police officer Sean Collier, who was allegedly killed by the Tsarnaev brothers.A week after the marathon bombings, 50 people remain hospitalized, including two in critical condition, according to a CNN tally.At least a dozen survivors have endured amputations.Patients at Boston Medical Center have received visits from war veterans who have also suffered amputations. The vets, Dr. Jeffrey Kalish said, told patients that their lives aren’t over because they’ve lost limbs.

“We’ve seen really tremendous success and great attitudes,” he said.Also Monday, Davis — the Boston police commissioner — said transit system police officer Richard Donohue, wounded in the firefight with the Tsarnaev brothers, was improving.”He was in grave condition when he went to the hospital, so we’re very optimistic at this point in time, and our prayers are with him and his family,” he said. – CNN