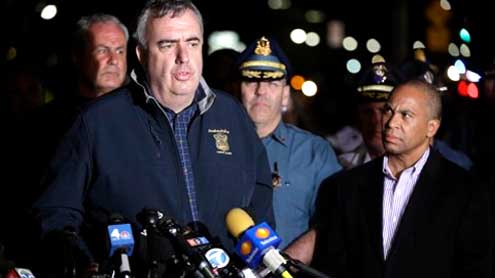 BOSTON: As churches paused to mourn the dead and console the survivors of the Boston Marathon bombing Sunday, the city’s police commissioner said the two suspects had such a large cache of weapons that they were probably planning other attacks.

The surviving suspect remained hospitalized and unable to speak with a gunshot wound to the throat.After the two brothers engaged in a gun battle with police early Friday, authorities found many unexploded homemade bombs at the scene, along with more than 250 rounds of ammunition.Police Commissioner Ed Davis said the stockpile was “as dangerous as it gets in urban policing.”

“We have reason to believe, based upon the evidence that was found at that scene — the explosions, the explosive ordnance that was unexploded and the firepower that they had — that they were going to attack other individuals. That’s my belief at this point.” Davis told CBS’s “Face the Nation.”On “Fox News Sunday,” he said authorities cannot be positive there are not more explosives somewhere that have not been found. But the people of Boston are safe, he insisted.

The suspects in the twin bombings that killed three people and wounded more than 180 are two ethnic Chechen brothers from southern Russia — 19-year-old Dzhokhar Tsarnaev and his 26-year-old brother, Tamerlan. Their motive remained unclear.The older brother was killed during a getaway attempt. The younger brother, Dzhokhar Tsarnaev, was still in serious condition Sunday after his capture Friday from a tarp-covered boat in a suburban Boston backyard. Authorities would not comment on whether he had been questioned.Sen. Dan Coats of Indiana, a member of the Senate Intelligence Committee, said Tsarnaev’s throat wound raised questions about when he will be able to talk again, if ever.

The wound “doesn’t mean he can’t communicate, but right now I think he’s in a condition where we can’t get any information from him at all,” Coats told ABC’s “This Week.”It was not clear whether Tsarnaev was shot by police or inflicted the wound himself.In the final standoff with police, shots were fired from the boat, but investigators have not determined where the gunfire was aimed, Davis said.In an interview with The Associated Press, the parents of Tamerlan Tsarnaev insisted Sunday that he came to Dagestan and Chechnya last year to visit relatives and had nothing to do with the militants operating in the volatile part of Russia. His father said he slept much of the time.

The younger Tsarnaev could be charged any day. The most serious charge available to federal prosecutors would be the use of a weapon of mass destruction to kill people, which carries a possible death sentence. Massachusetts does not have the death penalty.A lawyer for Tamerlan Tsarnaev’s wife told the AP Sunday night that federal authorities have asked to speak with her, and that he is discussing with them how to proceed.Attorney Amato DeLuca said Katherine Russell Tsarnaev did not suspect her husband of anything, and that there was no reason for her to have suspected him. He said she had been working 70 to 80 hours, seven days a week, as a home health care aide. While she was at work, her husband cared for their toddler daughter, he said.

Since her husband was killed, she has been staying at her parents’ home in North Kingstown, R.I.Meanwhile, across the rattled streets of Boston, churches opened their doors to remember the dead and ease the grief of the living.At the Cathedral of the Holy Cross in South Boston, photographs of the three people killed in the attack and a Massachusetts Institute of Technology police officer slain Thursday were displayed on the altar, each face illuminated by a glowing white pillar candle.”I hope we can all heal and move forward,” said Kelly McKernan, who was crying as she left the service. “And obviously, the Mass today was a first step for us in that direction.”

A six-block segment of Boylston Street, where the bombs were detonated, remained closed Sunday. But city officials were mapping out a plan to reopen it.Mayor Thomas Menino said Sunday that once the scene is released by the FBI, the city will follow a five-step process, including environmental testing and a safety assessment of buildings. The exact timetable was uncertain.Boston’s historic Trinity Church could not host services Sunday because it was within the crime scene, but the congregation was invited to worship at the Temple Israel synagogue instead. The FBI allowed church officials a half-hour Saturday to go inside to gather the priests’ robes, the wine and bread for Sunday’s service.

Trinity’s Rev. Samuel T. Lloyd III offered a prayer for those who were slain “and for those who must rebuild their lives without the legs that they ran and walked on last week.””So where is God when the terrorists do their work?” Lloyd asked. “God is there, holding us and sustaining us. God is in the pain the victims are suffering, and the healing that will go on. God is with us as we try still to build a just world, a world where there will not be terrorists doing their terrible damage.”Near the crime scene, Dan and Keri Arone were pushing their 11-week-old daughter in a stroller when they stopped along Newbury Street, a block from the bombing site, to watch investigators in white jumpsuits scour the pavement. Wearing his bright blue marathon jacket, Dan Arone said he had crossed the finish line 40 minutes before the explosions.

The Waltham, Mass., couple visited the area to leave behind pairs of their running shoes among the bouquets of flowers, hand-written signs and other gifts at a makeshift memorial on Boylston Street, near the police barriers.”I thought maybe we’d somehow get some closure,” Dan Arone said of leaving behind the sneakers. “But I don’t feel any closure yet.”The federal Bureau of Alcohol, Tobacco, Firearms and Explosives was tracing the suspects’ weapons to try to determine how they were obtained.

Neither of the brothers had permission to carry a gun. Cambridge Police Commissioner Robert Haas said it was unclear whether either of them ever applied for a gun permit, and the applications are not considered public records.But the younger brother would have been denied a permit based on his age alone. Only people 21 or older are allowed gun licenses in Massachusetts.Meanwhile, surgeons at a Cambridge hospital said the Boston transit police officer wounded in a shootout with the suspects had lost nearly all his blood, and his heart had stopped from a single gunshot wound that severed three major blood vessels in his right thigh.

Richard Donohue, 33, was in critical but stable condition. He is sedated and on a breathing machine but opened his eyes, moved his hands and feet and squeezed his wife’s hand Sunday.Massachusetts Gov. Deval Patrick is asking residents to observe a moment of silence Monday at the time the first of two bombs exploded. The one-minute tribute is scheduled for 2:50 p.m., exactly a week after the attacks. It will be followed by the ringing of bells in Boston and elsewhere in Massachusetts.

In New York, thousands of runners donned “I Run for Boston” bibs during a 4-mile run in Central Park, one of a number of races held around the world in support of the victims of the marathon bombings.Across the Atlantic Ocean, thousands of London Marathon runners offered their own tributes. The race began after a moment of silence, and many competitors wore black armbands as a sign of solidarity. – YahooNews