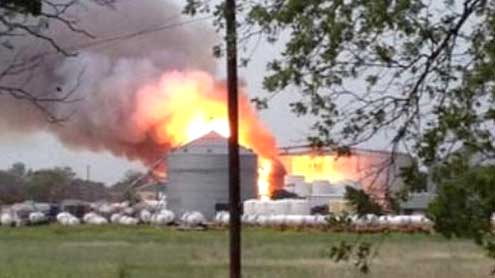 An explosion ripped through a fertilizer plant Wednesday night in the area of West, Texas, sending a massive fireball into the sky and causing dozens of injuries, officials said.

A number of nearby residents were being evacuated because of the possibility of another explosion, officials said.A hospital in nearby Waco, Texas, has been told to anticipate 100 injured people coming in from the fertilizer plant area, an official at the medical facility said.Glenn Robinson, CEO of Hillcrest Hospital, said a field triage station was being set up on a football field near the plant some 18 miles north of Waco after the Wednesday night explosion.”We have had a steady flow of patients coming in by ambulance as well as by private vehicles,” Robinson told CNN’s Anderson Cooper.

More than 60 patients were received as of 10 p.m. (11 p.m. ET), Robinson said, suffering from “blast injuries, orthopedic injuries (and) a lot of lacerations. While some of the injuries are minor, others are “quite serious,” he said.Hazardous material teams were being rushed to the scene, an emergency management official said.At least six helicopters are going to fly out those who are injured, Robinson said. Others are being transported by ambulance, and some are getting to the hospital by car, he added.

Two other hospitals in the region were also assisting.As many scrambled to assist the injured, another danger seemed to emerge Wednesday night.”What we are hearing is that there is one fertilizer tank that is still intact at the plant, and there are evacuations in place to make sure everyone gets away from the area safely in case of another explosion,” said Ben Stratmann, a spokesman for Texas State Sen. Brian Birdwell.

Photos of the explosion — which reportedly happened around 7:50 p.m. (8:50 p.m. ET) — showed a huge blaze and flames leaping over the roof of a structure and a plume of smoke rising high into the air.The West Fertilizer Plant is just north of Waco. A school and a nursing home are among the buildings near the plant, CNN affiliate KWTX reported.Texas Gov. Rick Perry said he is aware of the explosion, a spokesman said, and was working to get resources into the area.

Tommy Alford, who works in a convenience store about three miles from the plant, told CNN that several volunteer firefighters were at the store when they spotted smoke. Alford said the firefighters headed toward the scene and then between five and 10 minutes later, he heard a massive explosion.”It was massive; it was intense,” Alford said.Chrystal Anthony, a nearby resident, said she saw the flames engulf a nursing home and an apartment complex.

“It was an apartment complex that was devastated, the nursing home. The fire was close to a residential area,” Anthony said.”It was like a bomb went off,” said Barry Murry, a resident who lives about a mile away from the plant. “There were emergency vehicles everywhere. It has been overwhelming.”West, Texas, is a community of about 2,800 people, according to the U.S. Census Bureau.Sitting about 75 miles south of Dallas and 120 miles north of Austin, West is one of 22 incorporated communities in McLennan County. – CNN