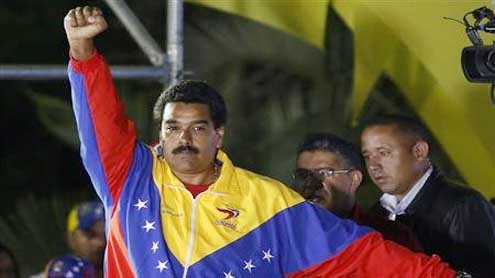 The controversy raised fears of political unrest in Venezuela, an OPEC nation of 29 million people with the world’s biggest oil reserves, although there was no immediate trouble.Opposition candidate Henrique Capriles said he did not recognize official results giving Maduro 50.7 percent support versus 49.1 percent for him, a difference of just 235,000 ballots.”Mr. Maduro, if you were illegitimate before, now you are even more loaded with illegitimacy,” Capriles said, alleging more than 3,000 “incidents” during the vote from gunshots to the re-opening of polling centers after their official closure.

“I didn’t fight against a candidate today, but against the whole abuse of power.”Though opposition supporters chanted “fraud” and banged pots and pans in protest, Capriles did not call them onto the streets, and Maduro gave his support to a full recount even as he insisted his victory was clean.The National Electoral Council said Maduro’s victory was “irreversible” and gave no indication when it might carry out a recount.Government supporters celebrated outside the Miraflores presidential palace, where Maduro paid an emotional tribute to Chavez, the socialist leader who named him as his successor in his last speech to the nation before dying last month of cancer.

“The fight continues!” Maduro, 50, told the victory rally, holding a picture of Chavez next to a crucifix and playing a recording of his voice singing Venezuela’s national anthem.”This was the first time without the giant candidate, but he left behind his ‘son,’ who is now going to be president and is going to show he is worthy of the fatherland.”Turnout was 79 percent, just below the record 80 percent last year when an ailing Chavez won re-election for a third time.Capriles, 40, had argued that voters were tired of divisive Chavez-era politics, and vowed to tackle daily worries such as violent crime, high inflation and creaking utilities.

Chavez’s death, at 58, had cemented his already cult-like status among supporters who adored his down-to-earth style, humble beginnings, aggressive “anti-imperialist” rhetoric, and channeling of oil revenue into social welfare projects.”Maduro is the continuation of the policies of President Chavez,” said Jhonni Gonzalez, 54, of the 23 de Enero slum of Caracas, where the late president has a huge following.”These 14 years have shown that socialism is the solution not only for Venezuela, but for humanity. It’s the solution for the world’s poor. Capriles represents capitalism.”

To detractors, though, the Chavez era was one of autocratic rule, the bullying of opponents, and the squandering of an unprecedented bonanza of oil income through corruption and inefficient management.A little-known union activist before becoming a lawmaker and Chavez confidante from the early 1990s, Maduro took over as acting president after his death.On the campaign trail, he faithfully invoked his mentor hundreds of times a day, calling himself the late leader’s political “son” and “apostle.”Capriles aides said they were fighting Chavez’s ghost.

As well as facing an opposition challenge to his legitimacy, Maduro will have to face skepticism from within the ruling coalition after such a narrow win.He has offered few clues as to how he might differ from his mentor. Like many in Chavez’s circle, his fierce loyalty precluded him from ever offering a different opinion in public.He will need to keep the support of powerful Congress head Diosdado Cabello, whom many Venezuelans suspect is a potential future rival even though the pair have publicly pledged loyalty.

And he will have to decide whether to keep or freshen up the senior economic team of Finance Minister Jorge Giordani, central bank president Nelson Merentes and Oil Minister Rafael Ramirez.Capriles campaigned on promises to introduce a Brazilian-style model that mixes pro-business policies with heavy state spending on welfare. But he vowed to move slowly in dismantling Chavez’s economic policies for fear of creating economic or political instability.

“We’ve spent the last 14 years with a government that hasn’t catered to us at all,” said Maitane Larrondo, a 33-year-old engineer who voted for Capriles On Sunday.The opposition leader had also vowed to end aid to left-wing Latin American governments such as Cuba, Ecuador, Bolivia and Nicaragua, and put a dampener on alliances with Chavez-era allies like Iran and Syria.The election was being closely watched in Cuba, which has relied heavily on Chavez’s help.Venezuela has been shipping about 115,000 barrels of oil a day to Cuba, partly in exchange for the services of thousands of medical workers. Some 30 economic joint ventures were launched during Chavez’s rule, and many more were planned. – YahooNews