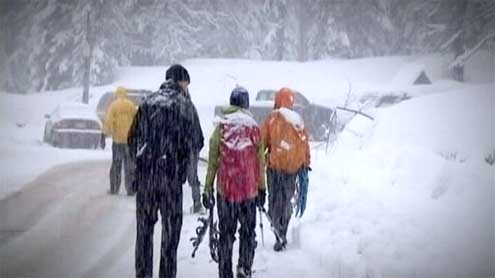 SEATTLE: A female snowshoer has died hours after she was dug out of an avalanche by fellow hikers, and a man remained missing Sunday, one day after a pair of spring avalanches struck separate groups hiking in the Cascade Mountains east of Seattle, authorities in Washington state said.

Sgt. Katie Larson with the King County Sheriff’s Office said a team of rescuers worked through the night in blizzard-like conditions to carry the female snowshoer off the mountain just after midnight.Medics confirmed that she had died when they reached the base of the mountain, Larson said.”The conditions yesterday were horrific,” Larson said Sunday. “It took 25 rescuers about five to six hours” to bring her off the mountain in a sled.

The woman, whose identity was not known, had been hiking with her dog near a group of a dozen other people Saturday afternoon when an avalanche hit Red Mountain near Snoqualmie Pass east of Seattle.She was buried in five feet of snow but was dug out with the help of the group of snowshoers, who had also been caught in the avalanche.Members of that group told authorities that it took them 45 minutes to find the woman. “They did their best to try to warm her up,” Larson said.

This is the first avalanche fatality reported in Washington state for the 2012-2013 season, according to the Northwest Weather and Avalanche Center in Seattle. Nationwide, 16 others have died avalanches this season, according to the Colorado Avalanche Information Center.Meanwhile, the search for a 60-year-old hiker who was swept down the mountain in a separate avalanche at Granite Mountain on Saturday was suspended indefinitely due to the poor weather conditions.

“There was a heavy snow dump last night, and conditions are still very hazardous,” Larson said.The man, from Kent, Wash., was with two other friends when the avalanche carried them more than 1,200 feet down the mountain. The two friends emerged from the snow, but their friend did not. The two men suffered injuries that were described as not life-threatening. One of them was taken to a hospital for treatment, but Larson did not know his condition.The avalanches occurred as heavy snow fell near Snoqualmie Pass.

Kenny Kramer, director of Northwest Weather and Avalanche Center, said between 20 and 30 inches of snow fell over the weekend and the center warned of dangerous avalanche conditions.”We had a considerable danger,” the meteorologist said Sunday. “We were expecting a lot of snow.”All that new snow was weakly attached to the old snow crust, making it more unstable, Kramer said.

Avalanches during the spring aren’t a rare occurrence, he said, noting that there’s a secondary peak of incidents during this time because the Northwest still sees winter-type storms that brings lots of snow. When that snow falls in the spring, it often warms up quickly, creating unstable conditions, he said.Won Shin, 56, of Mukilteo, Wash., was among the group of 12 snowshoers who were on Red Mountain at the time of the avalanche.He told The Seattle Times that when the avalanche hit, “the only thing I thought about was just, ‘Get out of here.’ I’ve never felt anything like that.” – YahooNews