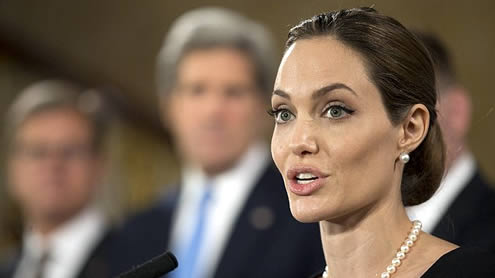 With her schoolmarm bun and pearl choker, Angelina Jolie cut a very stateswoman like figure as she made an appearance at the G8 Foreign Ministers Summit in London on Thursday.

But that wasn’t the only striking change to the Hollywood star’s conservative look. The scraped back hairdo revealed the 37-year-old’s abundance of grey hairs as she posed for the cameras alongside minister William Hague. 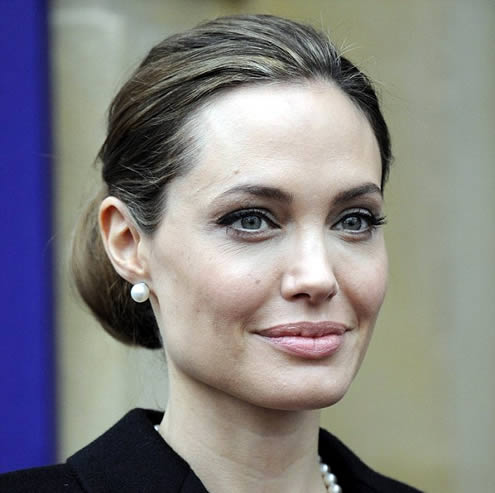 Angelina, the U.N.’s special envoy for refugees, dressed in all black, with a simple dress and overcoat to attend the high level summit at where she spoke out against sexual violence against women and children in war zones. With six children to watch over, perhaps she didn’t quite have time to keep her salon appointment before heading to the UK to attend the high level meeting. And thankfully, she managed to keep her infamous leg under control as she exchanged pleasantries with Foreign Secretary William Hague outside Lancaster House in London where the event took place.

Recently deceased former Prime Minister Baroness Thatcher would almost certainly have approved of her choice of jewellery – as Angelina accessorised her conservative look with a simple strand of pearls and matching earrings. Angelina’s presence at the conference no doubt shined a much needed spotlight on the cause. The Human Rights and Communications team at the Foreign & Commonwealth Office tweeted part of the actress’s speech.

She said: ‘Hundreds of thousands of women and children have been sexually assaulted in the wars of our generation. But wartime rape is not inevitable.  ‘This violence can be prevented, and it must be confronted. I have heard survivors of rape from Bosnia to (the Congo) say that the world simply does not care about them.  ‘But today I believe that their voices have been heard, and that we finally have some hope to offer them.

She continued: ‘It is encouraging to see men in leadership positions speaking out against rape. Rape is not a women’s issue, or a humanitarian issue, it is a global issue.’ Jolie and the U.N. special representative on sexual violence in conflict, Zanab Bangora, met with G8 foreign ministers as part of the two-day talks among eight world powers that are expected to focus on North Korea and the civil war in Syria. – Dailymail