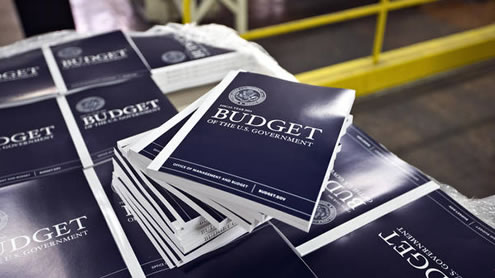 WASHINGTON: President Barack Obama sent Congress a $3.8 trillion budget plan that hopes to tame galloping deficits by raising taxes on the wealthy and trimming America’s most popular benefit programs. In aiming for a compromise between Republicans who refuse to raise taxes and Democrats who want to protect those benefits, he’s upset some on both sides.

The White House wants to break away from the current cycle of moving from one fiscal crisis to another while the government skirts the brink of a shut down. Deep political divisions have blocked substantial agreements to address the country’s gaping debt. It’s unlikely that Congress will begin serious budget negotiations before summer, when the government once again will be confronted with the need to raise its borrowing limit or face the prospect of a first-ever default on US debt.

Obama on Wednesday night hosted a private dinner at the White House with a dozen Republican senators as part of efforts to win over the opposition. Republican Sen. Johnny Isakson said in a statement, “Sitting down to talk about how to get our arms around our debt is a good first step to what I hope will be an ongoing discussion and a path forward to solving our nation’s problems.”

The president’s budget proposal includes $1.8 trillion in new deficit cuts as the US tries to wrestle down its debt. The last time the government ran an annual surplus was in 2001, the year of the 9/11 attacks that led to the wars in Afghanistan and Iraq. On Wednesday, the Treasury Department said the US deficit was on pace to finish below $1 trillion for the first time in five years. The deficit hit a record $1.41 trillion in budget year 2009.

Obama’s budget blueprint for 2014 assumes that Washington reverses the recent deep budget cuts that have become a daily reality for the military. It calls for a base Defense Department budget of $526.6 billion and $52 billion more than the level established by the blunt spending cuts, which had been designed to force the White House and Congress to reach a fiscal deal to avoid them.

The budget plan includes an $88.5 billion place holder for additional war costs in Afghanistan as Obama decides on the pace of the draw down of US combat troops next year. The president’s spending and tax plan for the budget year that begins October 1 is two months late. It projects deficit reductions of $1.8 trillion over the next decade, achieved with higher taxes, reductions in payments to Medicare health aid providers and cutbacks in the cost-of-living adjustments paid to millions of recipients in Social Security pensions and other government programs.

A key advocacy group for the aging said Wednesday it was “deeply dismayed” by the plan to trim the government’s two biggest benefit programs. Obama himself said his offer to trim future benefit increases for tens of millions of people is “less than optimal” and acceptable only if Republicans simultaneously agree to raise taxes on the wealthy.

“If anyone thinks I’ll finish the job of deficit reduction on the backs of middle-class families or through spending cuts alone that actually hurt our economy short-term, they should think again,” the president said. But Republicans have rejected higher taxes, arguing that the $600 billion increase on wealthy earners that was part of a December agreement to avoid a sharp hit to the economy is all they will tolerate.

“We Republicans have already done things to move to the middle, to find common ground,” said House of Representatives Budget Committee Chairman Paul Ryan, last year’s Republican vice presidential nominee, on MSNBC. The administration maintains that Obama’s proposal is balanced, with the proper mix of spending cuts and tax increases.

The Obama budget proposal will join competing budget outlines already approved by the Republican-controlled House and the Democratic-run Senate. Obama’s plan is not all about budget cuts. It includes an additional $50 billion in spending to fund infrastructure investments. It would also provide $1 billion to launch a network of 15 manufacturing innovation institutes across the country, and it earmarks funding to support high-speed rail projects.

The plan also would nearly double the federal tax on cigarettes to $1.95 per back. Many think that could deter young people from smoking. “Raising the price of tobacco is the single most effective way to keep kids from smoking,” said Dr. Tom Frieden, director of the Centers for Disease Control and Prevention. “It will protect kids. It will save lives. It will save money.” – Indiatimes