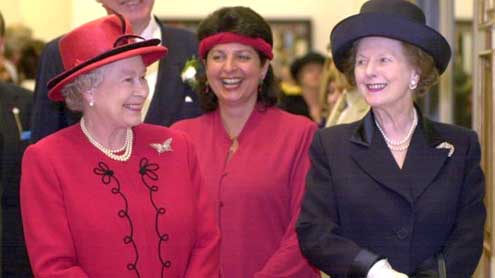 The Queen and Prince Philip broke with tradition yesterday by agreeing to attend the funeral of Baroness Thatcher.

At a top-level Government meeting to discuss plans for next Wednesday’s farewell to the Iron Lady, Palace officials said the monarch would join mourners at St Paul’s Cathedral.The Queen’s decision to cast protocol aside delighted Lady Thatcher’s friends and allies who had expressed disappointment that she was not to be honoured with a full state funeral.The Mail yesterday highlighted the groundswell of opinion that as Britain’s greatest peacetime prime minister, Lady Thatcher deserved in death the highest honour the state can bestow, and invited readers to join a petition – which thousands did.

However, yesterday’s news from Buckingham Palace is regarded as such an extraordinary gesture that it effectively elevates her funeral to a state occasion.The only other time a reigning monarch has attended the final farewell of a Prime Minister was in 1965, when the Queen joined the congregation for the funeral of Winston Churchill, the only premier in more than a century to be given full state honours.Traditionally, the monarch does not attend the funerals of ‘commoners’, however celebrated.The Queen did not go to the funerals of Anthony Eden, Harold Macmillan, Alec Douglas-Home, Harold Wilson, Edward Heath or James Callaghan, all of whom served as Prime Minister during her reign.

A Palace source said: ‘The Queen regularly sends representatives to funerals, whether it is senior members of the household or senior members of the Royal Family. The fact that she has decided to go herself is significant.’In 1881 Queen Victoria was prevented by protocol from attending the funeral of Benjamin Disraeli, instead sending a wreath of primroses.Cabinet Office minister Francis Maude, who is heading the Government committee making preparations for the funeral at St Paul’s Cathedral, said the Queen’s decision was momentous.

Mr Maude, who served as a minister under Lady Thatcher, said: ‘I think it is very significant that Her Majesty and the Duke want to attend. It underlines the fact that Lady Thatcher was not just a long-serving prime minister – she was also transformational.’Tory MP Ian Liddell-Grainger said the Queen’s decision to attend the funeral was the final step in giving the event the effective status of a full state funeral.Mr Liddell-Grainger, a direct descendant of Queen Victoria, said: ‘Lady Thatcher was not a member of the Royal Family and she is being given pretty much the highest funeral you can give a commoner.

‘The fact the Queen is attending is a very great honour and one she fully deserves. She was a remarkable woman who changed Britain and she deserves the pomp and ceremony and respect.’Joe Little, editor of Majesty magazine, said: ‘Lady Thatcher was the longest-serving Prime Minister of her reign. One cannot but feel that the Queen must have admired her for what she did and the way she did it.‘The Queen attended Lady Thatcher’s 80th birthday party – prior to that the feeling was that there was not much love lost between them. But the fact that she went to a personal event such as that underlined the empathy between them.’

Lady Thatcher’s funeral is technically a ‘ceremonial’ one with military honours, an equivalent of the ceremonies that marked the passing of the Queen Mother and Diana, Princess of Wales.President Obama and wife Michelle are expected to be invited, as are dozens more heads of state and significant figures from Lady Thatcher’s life, such as former Soviet leader Mikhail Gorbachev.Significantly, preparations for the occasion have been led by a former long-serving member of the Royal household, Sir Malcom Ross.

Eton and Sandhurst-educated Lieutenant-Colonel Ross GCVO OBE worked for the Queen for 18 years, rising to the position of Comptroller of the Lord Chamberlain’s Office, and was responsible for organising the Queen Mother’s funeral.In 2006, he briefly became Master of the Household to Prince Charles and also has the experience of 33 state visits.The multi-million pound cost of the occasion will be split between the state and the Thatcher estate, officials said.The former prime minister’s body is at an undisclosed location after being removed from the Ritz Hotel.

On Tuesday next week, her coffin will be taken to the Chapel of St Mary Undercroft in the Palace of Westminster. There will be a short service following its arrival, and the coffin will rest in the chapel overnight.In the morning it will be taken in a hearse to St Clement Danes, the Royal Air Force chapel on The Strand, then transferred to a gun carriage pulled by horses of the King’s Troop Royal Horse Artillery for its final procession along Fleet Street and up Ludgate Hill to St Paul’s Cathedral.Traffic will be stopped along the route, which will be lined by members of the Army, Royal Navy and Royal Air Force, bringing central London to a halt.

The Royal Artillery will mark the occasion with a gun salute fired at the Tower of London.Chelsea Pensioners will help make up a guard of honour. Lady Thatcher’s husband Denis’s funeral service was held at the chapel of the Royal Hospital in Chelsea in 2003, and she spent much time there in the years leading up to her death.Foreign Secretary William Hague today defended the taxpayer contribution to the funeral of Lady Thatcher and the costs of today’s debate.He said Britain could ‘afford’ to cover some of the costs of next week’s events.Speaking on BBC One’s Breakfast programme, Mr Hague said: ‘It’s right Parliament meets and commemorates such a leader of historic proportions in our country’s history.

‘She changed the course of our history and there have been many comments over the last few days from all corners of the political spectrum.’When it comes to money, the rebate she negotiated for this country from the EU has brought us so far £75 billion – which is twice the size of our annual defence budget.’I think that puts money in perspective… so I think we can afford to contribute to a funeral.’Lady Thatcher’s family is also meeting an unspecified amount of the funeral cost.Mr Hague said he believed many people on the left’s biggest problem with Lady Thatcher was ‘they could never beat her’.

‘They claimed to stand for millions of people but they could never get as many votes as Mrs Thatcher in an election,’ he said.Parliament is being recalled from its Easter break this afternoon, another highly unusual move to allow MPs to pay tribute to Lady Thatcher. David Cameron will lead the debate, and Ed Miliband and Nick Clegg will also speak.Flags are being flown at half-mast at UK government buildings and UK embassies around the world. They will be at half-mast again today when they will be lowered at sunrise and raised at sunset.