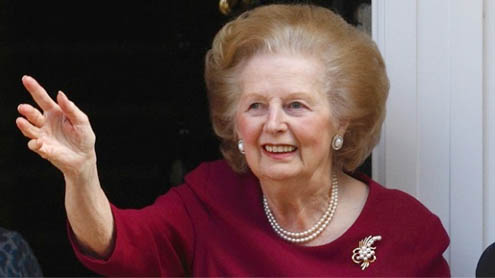 Former Conservative Prime Minister Margaret Thatcher has died of a stroke today aged 87.Her spokesman Lord Bell revealed the news that the former politician had passed away peacefully after a long battle with poor health.

Lord Bell said: ‘It is with great sadness that Mark and Carol Thatcher announced that their mother Baroness Thatcher died peacefully following a stroke this morning.’A further statement will be made later.’Britain’s first and only woman prime minister, who won three consecutive general elections, has been in fragile health since she suffered a series of minor strokes more than a decade ago.She suffered acute short-term memory loss and had a series of strokes over a decade.She spent 11 years in Downing Street, the longest run by any 20th century prime minister.

In 1990, a leadership challenge forced her to leave No 10 and two years later she was made a life peer, as Baroness Thatcher of Kesteven.In recent years she has led a quiet life cared for by her loyal housekeeper Kate. She suffered a minor stroke in 2002 which left her with short-term memory loss.Her beloved husband Denis died in 2003 and her children Mark and Carol both live abroad.

Her health was thrust into the global spotlight this year with the release of a Hollywood film about her with Meryl Streep in the lead role.The Iron Lady drew criticism from David Cameron and others for concentrating on the dementia she has suffered. Miss Streep won an Oscar for the role.Lady Thatcher was not well enough to join the Queen for a lunch with former and serving prime ministers as part of the Diamond Jubilee this summer. And two years ago she missed an 85th birthday party thrown in her honour by Mr Cameron at 10 Downing Street.

In October she was sufficiently well, however, to mark her 87th birthday with lunch at a restaurant in London’s  St James’s district with Mark and his wife. Iron Lady Baroness Thatcher, the grocer’s daughter, who became the longest serving British prime minister of the 20th century, is expected to be honoured with a full state funeral at Wesminster Abbey.Not since Winston Churchill has a politician been granted such a tribute. During her 11 years at Number 10 she changed not only the face of Britain but the entire world. – DailyMail