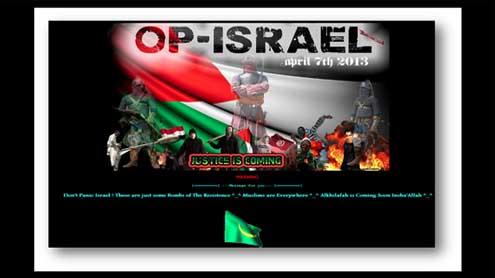 To ring in this year’s Holocaust Memorial Day, the classy hackers at Anonymous took down a bunch of Israeli government websites on Sunday and say they caused over $3 billion in damage.

But they didn’t totally get away with it. Within a few hours of the attack which Anonymous says affected 100,000 websites, 40,000 Facebook pages, 5,000 Twitter accounts and 30,000 bank accounts, an Israeli hacker broke into the website that Anonymous had set up for the attack, dubbed Operation Israel. Instead of the original anti-Israel messages that were originally on the site to protest Israel’s treatment of Palestine, the Israeli hacker rejiggered the site to play “Hatikvah,” Israel’s national anthem.Israel’s playing this one super cool.

Despite Anonymous’s claims of massive damage, the country’s cyber security officials say that the attack caused minimal damage. “So far it is as was expected, there is hardly any real damage,” Yitzhak Ben Yisrael from the government’s National Cyber Bureau told the press. “Anonymous doesn’t have the skills to damage the country’s vital infrastructure. And if that was its intention, then it wouldn’t have announced the attack ahead of time. It wants to create noise in the media about issues that are close to its heart.”

This is more or less what Anonymous always does, often with varying levels of success. Regardless of the amount of damage done, the scale of the attack is bound to be embarrassing for the Israeli government. This is the second time that Anonymous has successfully taken down Israeli government websites. The original #OpIsrael attack happened last November and affected some 600 sites and resulted in the hackers released personal information for thousands of high-ranking officials.

Israel denied then that the attack did any damage, and some tech writers balked at the effort, saying that Anonymous had lost its swagger. If that was the case then, Anonymous just looks insensitive now. The Holocaust and any holiday commemorating it is hardly a topic to goof around about. And given Israel’s allege involvement in the infamous Stuxnet cyber attack, it’s hard to believe a bunch of zany hackers with a bad DDoSing habit could really stand up to their security teams. They didn’t either.  – YahooNews