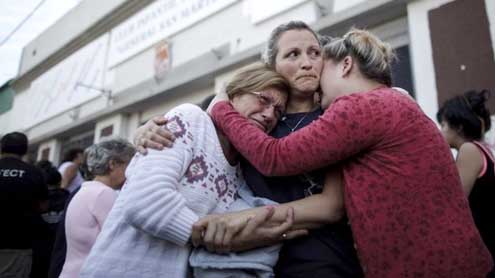 Emergency workers in Argentina continue to try to rescue residents stranded by flooding in Buenos Aires and La Plata.

More than 50 people are known to have died after one of the heaviest storms recorded caused flash floods.Thousands were evacuated from their homes and dozens are still stranded on rooftops, treetops and the roofs of city buses, local media report.The government has declared three days of national mourning after what it called “an unprecedented catastrophe”.

“We’ve never seen anything like it,” provincial governor Daniel Scioli said. “People were taken by surprise, and some didn’t have time to escape this deadly trap,” Mr Scioli said, referring to the speed with which the waters rose.Provincial officials said 40cm (16in) of rain fell on the city of La Plata in the space of two hours late on Tuesday night.Earlier, the storm had dumped 15cm of rainfall on the capital, Buenos Aires.

Local officials said at least 48 people were killed in La Plata, six in Buenos Aires and two in its suburbs. The Red Cross said most of the victims had been elderly people who drowned in their homes.So far, only half of the bodies have been identified and rescue workers fear the number of dead may rise as more bodies are found as the flood waters recede.Firefighter Federico Langone said in some areas of La Plata, the flood waters had reached a height of 1.5m (5ft).More than 3,000 people had to leave their homes and 80,000 still do not have electricity, with two of La Plata’s hospitals also affected by the power cuts.

On Wednesday night, some of La Plata’s residents set up roadblocks to “protect their neighbourhoods from looters”.President Cristina Fernandez de Kirchner on Wednesday visited Tolosa, the worst affected neighbourhood of La Plata, where she grew up and where her mother still lives.Ms Fernandez acknowledged residents’ fears and promised to increase security.Before her arrival, dozens of people had looted a supermarket. Three police officers were injured in scuffles with people trying to break into two other supermarkets.

In Buenos Aires, where the rains had been at their worst overnight Monday to Tuesday, the floods have begun to recede and residents have started the clean-up.Damp clothes and furniture were piled by roadsides as neighbours assessed the damage to their homes.Mayor Mauricio Macri said about 350,000 people had been affected by the torrents of rain. Hundreds are still in shelters.Pope Francis, an Argentine, has called on the authorities to step up their assistance to those left homeless by the storm.The Pope sent a telegram to his newly appointed successor as Buenos Aires Archbishop, Mario Poli, saying he was praying for those who died, their families and survivors of the disaster. – BBC