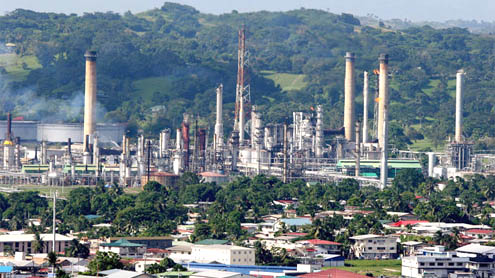 INGSTON, Jamaica: The turquoise waters that have long brought treasure seekers to the Caribbean now are drawing a new kind of explorer as countries across the region increasingly open their seas to oil exploration.

From the Bahamas and Cuba down to Aruba and Suriname, international oil companies are lining up to locate potentially rich offshore deposits in the Caribbean. The countries hope drilling could lead to a black-gold bonanza, easing demand for imported oil and diversifying their economies.It’s a longstanding dream for many. As the Dominican songwriter Juan Luis Guerra once sang, “If petroleum sprang from here, oh but there would be light and hope.”

So far, the twin-island nation of Trinidad & Tobago is the only major hydrocarbons producer in the Caribbean, and its waters are crowded with offshore platforms. The country sits just about seven miles (11 kilometers) off the coast of Venezuela, which has the world’s largest proven oil reserves. It’s pushing hard into deep-water drilling and has signed production-sharing contracts with British oil company BP for new exploration blocks.A growing number of other Caribbean nations are also authorizing or at least aggressively pursuing offshore exploration.

The Bahamas recently announced it would try offshore exploratory drilling and said it should have enough information by late 2014 to decide whether it can move forward with production. A voter referendum would first have to decide the matter. Bahamas Petroleum Company CEO Simon Potter said a rig will drill to subsea depths of roughly 22,000 feet (6,705 meters) in some 1,600 feet (488 meters) of water adjacent to Cuba’s offshore territory.Barbados and Jamaica have also been seeking well exploration in their seas, while the Anglo-Dutch group Shell announced in December it was preparing to sink its third offshore well in nearby French Guiana, an overseas French department, with other companies also exploring in deep waters there.

“What once was a trickle is fast becoming a stream in the Caribbean, with new announcements of expanding deep-water exploration lease offerings and drilling permits being issued,” said Lee Hunt, a Houston-based consultant who retired last year as the longtime president of the International Association of Drilling Contractors.The push for exploration has been fed partly by worries that Venezuelan President Hugo Chavez’s nearly two-year-long cancer fight and March 5 death would affect a Venezuelan aid program called PetroCaribe that sells petroleum to 17 Caribbean countries on preferential terms.

PetroCaribe provided $14 billion worth of Venezuelan oil to the region last year, with Cuba being the principal beneficiary. Chavez’s successor Nicolas Maduro hasn’t said he would stop the aid, but his challenger in April 14 elections, Gov. Henrique Capriles, has pledged to cut off subsidized oil to Cuba and reevaluate the Petro Caribe program if elected.Keeping the oil flowing is crucial. Caribbean countries generate nearly all their power from imported oil although the region is blessed with solar, wind and other alternative energy opportunities.

Nonetheless, many people across the region fear their famed clear water, fringing reefs and white-sand beaches could end up a casualty to any future oil boom, threatening the tourism bonanza that many countries already depend on. Even with the possibility of a windfall still distant, regional officials have begun to discuss how they would cooperate in the event of a major accident, such as the 2010 Deepwater Horizon oil spill in the Gulf of Mexico.”First, we have to prevent any kind of spill. And second, if something happens, we have to make sure everyone is working together,” said Ernesto Soberon Guzman, the Cuban ambassador to the Bahamas, during regional talks about oil spill preparedness in the Bahamaian capital of Nassau this month.

Ocean currents practically assure that a big spill in one Caribbean nation would significantly affect neighbors, possibly even the U.S. East Coast. Many Gulf communities are still recovering from the Deepwater Horizon accident, the country’s largest offshore oil spill.”If oil rises to the surface and gets to the surface currents, it would start flowing towards our waters and our shores,” said Capt. John Slaughter, chief of planning, readiness, and response for the U.S. Coast Guard’s Miami-based 7th District. “We’re going to take every action we can to prevent that from happening.”

Adding to complications, the overall Caribbean region, with the exception of Trinidad & Tobago, is still an uncertain frontier for offshore oil and gas, said Jorge R. Pinon, a Latin America and Caribbean energy expert at the University of Texas in Austin.Cuba, for example, authorized exploratory drilling for ultra-deep deposits estimated to hold 5 billion to 9 billion barrels of oil, but its dreams were put on hold last year when three initial exploratory wells were unsuccessful and the massive platform that drilled them sailed away, with no scheduled return date.”Lots of work remains to be done in seismic studies to really understand the complexity of the region’s geology and to see if the possibility of commercial hydrocarbon reservoirs exists,” Pinon said.

Such doubts, however, have mostly been cast aside in the face of oil prices topping $100 a barrel. And Caribbean governments are trying hard to lure more oil companies to take the expensive gamble of dispatching offshore drilling rigs, which can cost up to $500,000 per day to operate.In Guyana and Suriname, officials are busy licensing deals and offering concessions in a long-ignored basin the U.S. Geological Survey last year estimated to have “significant undiscovered conventional oil potential.”

Exploratory drilling in deep waters has already begun off Guyana, where last year an international consortium moved to cap a high-pressure well at a subsea depth of 16,000 feet (4,876) meters over safety concerns. Several oil companies still believe the area is promising, and Spanish energy company Repsol and the U.K.’s Tullow Oil PLC are negotiating new licenses, according to Guyana Natural Resources Minister Robert Persaud. Exploratory wells also were sunk last year in waters off the Caribbean coast of Colombia.”I can tell you now that the basin is getting very, very crowded. But we have some unused blocks to give,” Persaud said.With so many countries hoping to strike it rich, Hunt forecasts interest by major oil companies only will be growing.”The Caribbean is no longer kind of the forgotten basin,” he said. “I think it is going to become a prominent player in deep-water drilling.” – YahooNews