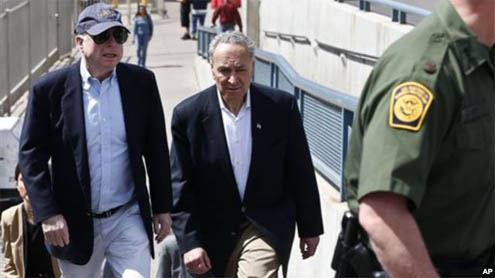 WASHINGTON: The U.S. Congress is not in session this week, but a group of senators working on immigration reform are scrambling to finish a bill to introduce to Congress when it resumes in 11 days.

Four of the eight senators visited the U.S.-Mexico border on Wednesday, balancing a highly publicized helicopter flyover with private phone negotiations with other stakeholders. Democratic Senator Charles Schumer of New York, on his first-ever trip to the border, expressed hope the group would have a bill ready for Congress when it reconvenes April 8.“The bottom line is we’re very close,” Schumer said at a press conference in Nogales, Arizona Wednesday. “I’d say we’re 90 percent there. We have a few little problems to work on. We’ve been on the phone with our four colleagues all day.”

The fence that divides Nogales, Arizona from Nogales, Mexico is five meters high, more than twice the height of an average woman. Yet a woman scaled the metal fence while the senators were touring the area.Customs and Border Patrol spokesman Victor Brabble said the 24-year-old Mexican woman has been repatriated.McCain and his colleagues face the daunting task of writing legislation that not only keeps the borders secure and makes citizenship available to some of the 11 million foreigners living unlawfully in the United States, but also balances U.S. labor union and business demands and is acceptable to a divided electorate.

The immigration reform movement has been years in the making, but after Latino and Asian-American voters showed their influence in the 2012 elections, more conservative and liberal politicians than ever before have embraced taking action, although many remain divided over how to proceed.Republican Eric Cantor, the number two lawmaker in the U.S. House of Representatives, told Fox News Thursday that passing comprehensive immigration reform will be difficult, but suggested some small steps could be taken.

“We’ve got an opportunity to come together on one point, and that is the kids,” he told the U.S. news outlet. “If a kid was brought here by his parents or her parents, unbeknownst to them, and knows no other place … than America as home, why wouldn’t we want to give them a path to citizenship, and I think we should.”U.S. President Barack Obama has raised the issue of immigration reform several times this week, first at a citizenship ceremony at the White House on Monday, and then in two interviews with Spanish-language television networks on Wednesday.

Obama, who plans to visit Mexico in May, told Telemundo he has his own immigration bill ready if the senators don’t achieve their goal, but he said he doesn’t think that will be necessary.”If we have a bill introduced at the beginning of next month as these senators indicate it will be, then I’m confident that we can get it done, certainly before the end of the summer,” he said.The timing is particularly important, since politicians want to firm up immigration reform before the next election season begins. – VOA