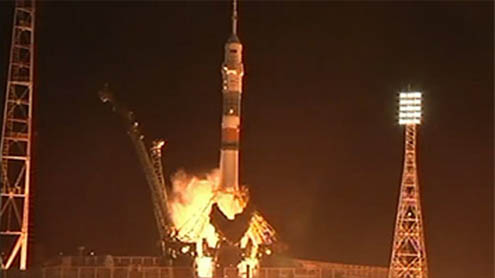 BAIKONUR: A crew of two Russians and an American blasted off on Friday on a Russian rocket for the International Space Station, in a trip scheduled to be the fastest ever manned journey to the facility.

The trio successfully launched from Russia's Baikonur cosmodrome in Kazakhstan, with a journey time expected to be just six hours compared with the previous time of over two days, an AFP correspondent reported.Russian cosmonauts Pavel Vinogradov and Alexander Misurkin and American Chris Cassidy are expected to spend the next five months aboard the station after they dock later on Friday.The initial stages of the launch on the Soyuz-FG rocket were completed without a hitch, mission control in Moscow said, leaving the Soyuz-TMA capsule ready for its fast track ride to the ISS.

The slash in travel time has been made possible because technological improvements mean the Soyuz will only need to orbit the Earth four times before docking with the ISS whereas previously some 30 orbits had to be made.The manned “express” flight comes after Russia successfully sent three Progress supply capsules in August, October and February to the station via the short six hour route rather than two days.Vinogradov, a veteran of two previous space flights, said at the pre-launch news conference that the shortened flight time has several advantages for the crew.

Firstly, as the crew only start to experience the tough effects of weightlessness after 4-5 hours of flight they will be in better shape when they arrive at the station for the docking procedure.”During the initial time the crew feels completely normal and works normally,” he said.Also, the reduced time means that the Soyuz capsule will be able to deliver biological materials for experiments aboard the ISS in time before they spoil, something that would not have been possible with a two day trip.”With such a short time the crew could even take an ice cream — it would not be able to melt,” said Vinogradov.

After docking at 0231 GMT on Friday, on board they will join incumbent crew Chris Hadfield of Canada, Tom Marshburn of Nasa and Russia's Roman Romanenko.Hadfield has over the last months built up a huge following with colourful tweets from space and spectacular pictures of the Earth below.”A long & big day ahead as 3 friends launch in their Soyuz rocket from Baikonur to dock with us… Godspeed,” he tweeted ahead of the trio's launch. – TOI