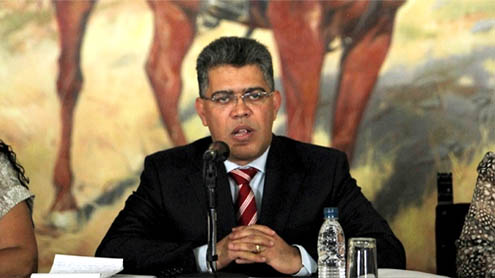 CARACAS: Venezuela’s government has halted lines of communication established by a top U.S. diplomat to protest what it says has been U.S. interference in the country’s internal affairs ahead of an election set next month to replace the late President Hugo Chavez.

He said the government had formally “suspended any contact and any communication that had been established with the call of Mrs. Jacobson in the month of November.” He emphasized, however, that diplomatic and consular relations would remain between the two countries.The U.S. Embassy in Caracas had not responded to a request for comment by Wednesday afternoon.Venezuela’s government expelled two U.S. military attaches this month for allegedly talking to members of the country’s armed forces. Washington responded by ejecting two Venezuelan diplomats, who were honored by Jaua Wednesday.

The two countries haven’t had ambassadors posted in each other’s capitals since 2010.Ahead of an April 14 presidential vote, Venezuelan officials have escalated their rhetoric against the U.S., with acting leader and government candidate Nicolas Maduro even accusing the U.S. of infecting Chavez with the cancer that killed him.And even as Maduro has said U.S. officials are backing Capriles’ candidacy, he has accused two former U.S. assistant secretaries of state of plotting to kill Capriles in the hopes of fomenting a coup. The U.S. State Department has rejected that accusation while calling for free and fair elections.

On Wednesday, Jaua accused the former U.S. diplomats of seeking Central American mercenaries to carry out the supposed assassination plot.”Hopefully there will be a rectification and the meddling of the United States will cease,” Jaua said.Wednesday’s action and the growing accusations mark “a level of paranoia that is very much on the rise,” said Cynthia Arnson, director of the Latin American Program at the Washington-based Woodrow Wilson International Center for Scholars.

“Whether they believe the allegations or are simply using them for political effect, it marks a very troubling turn in the relationship,” Arnson said. “And once it’s no longer politically useful to whip up fear of imperialism for internal political purposes, what concretely will happen in the relationship?”Chavez was fond of calling the United States “the empire” and famously referred to President George W. Bush as the “devil” at a U.N. General Assembly meeting. Such words endeared the leftist leader to his followers, already suspicious after U.S. officials recognized the replacement government that took control after Chavez was ousted briefly in a 2002 coup.

Maduro has repeated many of Chavez’s tactics in his electoral bid, down to the hours-long speeches and nationalistic rhetoric.Recognizing the fragile atmosphere in Venezuela, U.S. officials have pointedly not made comments that could be used for political ends by Chavez’s successors, Arnson said.”The truly bizarre element is that even with staying out, these accusations are surfacing,” she said.