Airports alerted to prevent Italy envoy from flying out 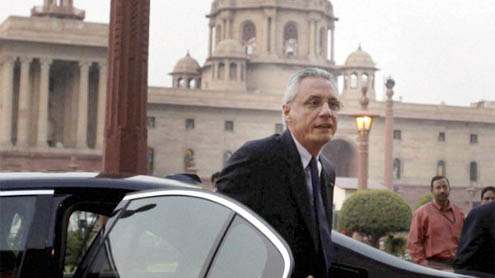 Airports alerted to prevent Italy envoy from flying out

TRIVANDRUM:  Deepening the diplomatic tussle between India and Italy over the trial of two Italian marines charged with the murder of two Indian fishermen off the Kerala coast in February last year, the government of India has issued alerts in airports and ports against Italian Ambassador Daniele Mancini leaving the country.

The alert was issued by the home ministry in the light of the supreme court directive to the Italian envoy not to leave the country without orders.Manicini had given an undertaking in the apex court to return the marines, allowed to go to their country on February 18 for voting in the national elections.A division bench headed by Chief Justice Altamas Kabeer had on Wednesday restrained the ambassador from leaving the country when the attorney-general informed the court about Italy’s decision not to return the marines. The court has asked Mancini to appear before the court on March 18 and explain the position.

External Affairs Minister Salman Khursid said the government would fully comply with the apex court order as long as the marines did not return to the country and face the trial. He told reporters outside the parliament on Friday that all agencies of the government were obliged to implement the court order.Khursid said that the next course of the action will be known after the Supreme Court takes up the case on Monday.

The government has asked newly appointed Indian Ambassador to Italy Basant Kumar Gupta not to assume charge. Gupta, who was scheduled to leave for Rome on Friday, has been asked to stay back. Italy sought to assuage the feelings of the people by offering facilities for the education of the children of the two fishermen shot dead by the marines mistaking them to be pirates in Italy.The Italian government had earlier offered Rs10 million each to the family of Jelastine and Ajesh Binki, the two deceased fishermen.

The Kerala police had registered a case of murder against the marines and begun the process in the Quilon district. However, on a petition challenging the jurisdiction of the country in prosecuting the marines, the Supreme Court ruled that the state had no power to try the case and asked the federal government to set up a special court for the trial.Italy argued that the shooting had taken place in international waters, where Indian laws were not applicable.

Meanwhile, Kerala Chief Minister Oommen Chandy on Friday asserted that state would make all efforts to bring back the two Italian  marines to face trail in the fishermen killing case.  The Congress-led United Democratic Front Government in the state had conveyed its “strong protest” to the Centre against the Italian Government’s decision not to return the marines to India, he told reporters here.Kerala’s stand was that the marines charged with shooting to death two fishermen from the state in February last year should stand trial in India under Indian law, added Chandy, who had on Thursday took up the issue with Prime Minister Manmohan Singh in Delhi.