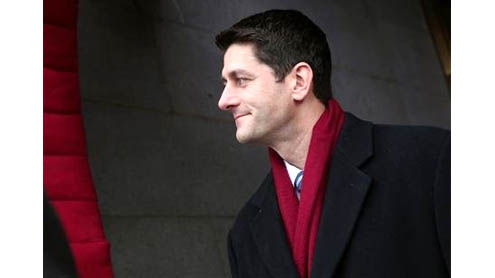 Ryan, who plans to unveil the House Republican budget on Tuesday, said in a Wall Street Journal opinion piece his proposal calls for the U.S. government to spend a total of about $41 trillion through 2023, a 3.4 percent annual increase.That compares to the current spending trajectory of $46 trillion over 10 years, a 5 percent annual increase.”Because the U.S. economy will grow faster than spending, the budget will balance by 2023 and debt held by the public will drop to just over half the size of the economy,” Ryan wrote.

The Wisconsin Republican and 2012 vice presidential candidate said his budget will grant approval to the northern portion of the controversial Canada-to-Texas Keystone XL oil pipeline, which he contends will create 20,000 direct jobs and 118,000 indirect jobs.As in past years, Ryan’s budget will seek to convert Medicare health care for the elderly into a voucher-like system under which seniors receive a subsidy to purchase private insurance or traditional Medicare. But he said there will be no changes for those 55 or older, so the plan does contribute savings to achieve balance in the 10-year window.Ryan said his budget will again seek to turn control and funding for Medicaid health care for the poor and food stamps over to states, and “paves the way” for comprehensive tax reform, with a goal of just two tax brackets: 10 percent and 25 percent. – YahooNews