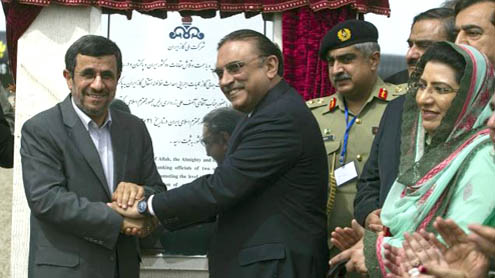 CHABAHAR: Iranian and Pakistani leaders inaugurated the construction of a much-delayed section of a $7.5 billion gas pipeline linking the two neighbours Monday, defying the threat of US sanctions.

President Mahmoud Ahmadinejad launched the project with his Pakistani counterpart Asif Ali Zardari at a ceremony on the border, hailing a blow to US-led sanctions targeting his country’s oil and gas sector. The two leaders unveiled a plaque before shaking hands and offering prayers for the successful conclusion of the project, which involves the laying of a 780-kilometre section of the pipeline on the Pakistani side, expected to cost some $1.5 billion.

“The completion of the pipeline is in the interests of peace, security and progress of the two countries… It will also consolidate the economic, political and security ties of the two nations,” they said in a joint statement. Ahmadinejad hailed the fact that work on the new section of pipeline was going ahead despite US sanctions against Iran’s oil and gas sector imposed over its controversial nuclear programme. “This gas pipeline is a show of resistance against domination,” Ahmadinejad said.

“There are some nations who are against the progress of people, and so they are using the nuclear issue as a pretext to hinder the progress of the nations.” he said. “This pipeline has nothing to do with the nuclear issue, you cannot build a nuclear bomb with natural gas,” he said, speaking alongside Zardari in comments broadcast live on state television. “This pipeline is peacemaker, so if those countries are not cooperating, then they should not get in the way.”

Iran’s presidency website quoted Zardari as praising the “historical” event and saying it would help his own country’s development. He added that through the pipeline project, Pakistan and Iran were consolidating their ties. In his address at the event, Zardari termed the pipeline project as “very important” for Pakistan. He said the prosperity of Pakistan and Iran was inter-linked and the former was striving to become self-reliant. The international community, he said, was unaware of the problems of the regional countries and were not cognisant of appropriate solutions to many issues. The president said that the relations between Pakistan and Iran were strengthened through commonality of religion and culture. Zardari said the world peace was correlated with peace in Pakistan and stressed that the country was not against any other state.

Although the pipeline on the Iranian side has almost been completed, Pakistan has run into repeated difficulties in financing the project in the face of the threat of US sanctions. Like the European Union, Washington has slapped crippling unilateral sanctions on Iran, over and above UN sanctions imposed over its refusal to suspend uranium enrichment. The Karachi Stock Exchange slumped almost 2.5 percent on fears of possible US sanctions over the deal. – DailyTimes