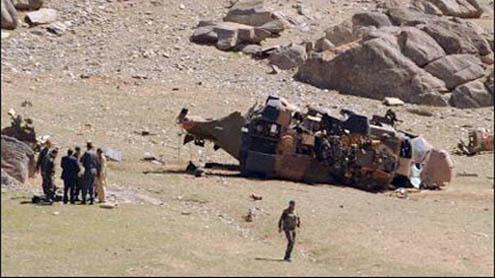 KABUL: A helicopter crash in southern Afghanistan killed five members of the NATO-led International Security Assistance Force, NATO said on Tuesday, although there were no immediate details about the cause of the crash.

A brief ISAF statement said the crash occurred on Monday.”The cause of the crash is under investigation, however initial reporting indicates there was no enemy activity in the area at the time of the incident,” the NATO statement said.It also did not give any details about the nationality of the troops killed, although U.S. and British forces make up the bulk of the NATO-led contingent in Afghanistan’s south. Australian troops also still operate in the south.

The crash came on the same day that two U.S. troops and five Afghan police and soldiers were killed in a so-called insider attack by a person in an Afghan military uniform in the restive east of the country.New Defense Secretary Chuck Hagel left Afghanistan earlier on Monday after a difficult first trip to Kabul.His trip was marred by a suicide bomb attack near where he was holding a meeting, and differences with Afghan President Hamid Karzai, who accused the United States of colluding with the Taliban.

Helicopter crashes are not uncommon in Afghanistan and the Taliban and others often claim to have shot them down, although such claims by insurgents are often exaggerated.Last August, 11 people, including seven U.S. soldiers, were killed when a Black Hawk helicopter crashed in southern Afghanistan.The worst such incident was in August 2011, when the Taliban shot down a CH-47 Chinook transport helicopter, killing all 38 people on board, including 25 U.S. special operations troops. – YahooNews