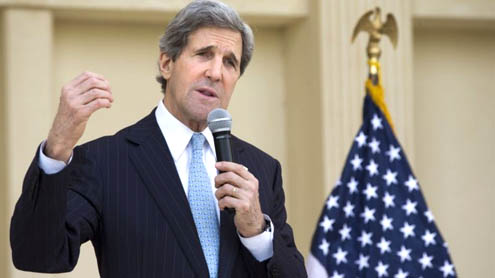 John Kerry wrapped up his first trip abroad as Secretary of State. Already, his diplomatic style and approach seem to differ from those of his predecessor, Hillary Clinton.

From the start, John Kerry said he knew he had “big heels to fill” replacing Hillary Clinton. She said his service on the Senate Foreign Relations Committee made him the right choice.”He has a view of the world that he has acted on, first as that young returning veteran from Vietnam who appeared before this committee, through the time that he served with such distinction as its chairman.”On his first trip as secretary of state, this son of a foreign service family made clear his commitment to the men and women who carry out U.S. policy abroad.

“I have to tell you that the job you are engaged in is one of the greatest jobs in the world, and I am now privileged to share that journey with you.”So how will John Kerry’s time as Washington’s top diplomat differ from Hillary Clinton’s? Steve Heydemann at the U.S. Institute of Peace says Clinton’s early rivalry with Barack Obama put pressure on her to show loyalty to the president.”She, I think, worked very hard to preserve the impression of consensus even though we now know that there were some important differences under the surface. It seems to me that Secretary Kerry has been more willing to push the boundaries of policy, to challenge the limits imposed by the White House.”

Heydemann says Kerry’s legislative career gives him more diplomatic freedom.”It seems to me he feels that, coming out of a long career in the Senate, that he is in a somewhat different position than Secretary Clinton was in taking this slightly more independent, more assertive role.”Secretary Clinton spent much of her time boosting U.S. diplomatic and commercial ties in Asia.American University professor Pek Koon Heng says Kerry will have an easier time.”Secretary Clinton has basically paved the way for Secretary Kerry to have more value added in the impact of policies that the U.S. will see in the coming months.”

Heng expects Kerry will advance Washington’s so-called Asia Pivot. But his first official trip abroad was designed to consult with traditional U.S. allies in Europe and deal with longstanding problems in the Middle East.With some diplomatic ties strained by wars in Iraq and Afghanistan, Steve Heydemann says Kerry has an opportunity to build on international cooperation.”Secretary Kerry is very much aligned with the view of the White House and of Secretary Clinton about the value of diplomacy, about the value of working with allies, about avoiding the kind of unilateralism that defined foreign policy under the previous administration.”Kerry will accompany President Obama to the Middle East later this month. – VOA

Allah’s mercy and the fragile world we live in