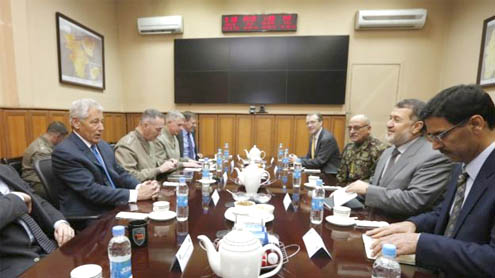 U.S. Defense Secretary Chuck Hagel’s first visit to Afghanistan was marred by a contentious speech by Afghan President Hamid Karzai, as well as a series of security threats that forced the cancellation of a scheduled news conference.

Authorities did not elaborate on the security issues, but a day earlier two suicide bombings – one in Kabul and the other in Khost – killed 19 people.  The bombing in Kabul targeted the Afghan Defense Ministry as Hagel was visiting the capital.In a speech early Sunday, President Karzai accused the Taliban of being “at the service of America” by using attacks like the ones on Saturday to frighten Afghans into wanting foreign forces to remain in Afghanistan beyond the 2014 deadline.

In comments to reporters travelling with him, Hagel said he spoke “clearly and directly” to Mr. Karzai, saying it was not true that the United States was working unilaterally with the Taliban.  He said that any prospect for peace or political settlements “has to be led by the Afghans.”The top U.S. general in Afghanistan, General Joseph Dunford, also rebuked the president’s comments by saying, “we have fought too hard over the past 12 years… shed too much blood… to ever think that violence or instability would be to our advantage.”

The Karzai government also alleged that U.S.-led forces working alongside Afghans were abusing and arresting university students.Hagel comes to Afghanistan as it struggles with the United States over control of detention facilities and the pace for foreign troop withdrawal.  A ceremony to transfer U.S. control of a main detention facility to Afghanistan Saturday also was cancelled as a deal struck between the two governments broke down.Last month, Hagel’s predecessor, Leon Panetta, said that NATO allies were considering leaving between 8,000 and 12,000 international troops in Afghanistan after 2014.  Currently, there are about 100,000 NATO troops in Afghanistan.