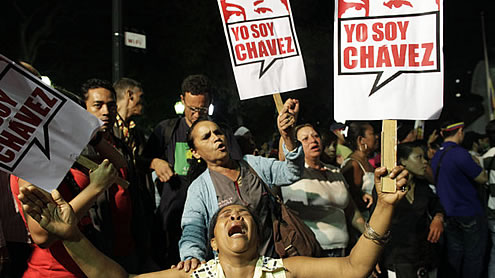 CARACAS, Venezuela — Some in anguish, some in fear, Venezuelans raced for home and stocked up on food and water Tuesday after the government announced the death of President Hugo Chavez, the larger-than-life firebrand socialist who led the nation for 14 years.

Vice President Nicolas Maduro’s voice broke and tears ran down his face as he appeared on national television to announce that Chavez died at 4:25 p.m. local time (3:55 p.m. EST, 1755 GMT) “after battling hard against an illness over nearly two years.” He did not say what exactly killed Chavez, although the government had announced the previous night that a severe new respiratory infection had severely weakened him. A few hours later, Foreign Minister Elias Jaua affirmed one of Chavez’s final wishes: Maduro would be interim president and then be the ruling party’s candidate to carry on Chavez’s populist “revolution” in elections to be called within 30 days.

It was a day fraught with mixed signals, some foreboding and some violent. Just a few hours before announcing Chavez’s death, Maduro made a virulent speech against enemies he claimed were trying to undermine Venezuelan democracy. And he said two U.S. military attaches had been expelled for trying to destabilize the nation. In announcing the death of the former army paratrooper who wielded Venezuela’s oil wealth to benefit the poor and win friends regionally, Maduro shifted tone. He called on Venezuelans to be “dignified heirs of the giant man” Chavez was. “Let there be no weakness, no violence. Let there be no hate. In our hearts there should only be one sentiment: Love. Love, peace and discipline.”

The government declared 7 days of mourning and closed all schools and universities until next Monday. All across downtown Caracas, shops and restaurants began to close and Venezuelans hustled for home, some even breaking into a run. Many people looked incredulous or anguished. “I feel a sorrow so big I can’t speak,” said Yamilina Barrios, a 39-year-old clerk who works in the Industry Ministry, her face covered in tears. “He was the best this country had.” “I hope the country calms down and continues the work that he left us, continues in unity and the progress continues,” Barrios said.

Among the nervous was Maria Elena Lovera, a 45-year-old housewife. “I want to go home. People are crazy and are way too upset.” There were several incidents of political violence. In one, a group of masked, helmeted men on motorcycles, some brandishing revolvers, attacked about 40 students who had been protesting for more than a week near the Supreme Court building to demand the government give more information about Chavez’s health. The attackers, who didn’t wear clothing identifying any political allegiance, burned the students’ tents and scattered their food just minutes after the death was announced. “They burned everything we had,” said student leader Gaby Arellano. She said she saw four of the attackers with pistols but none fired a shot.

Outside the military hospital where Chavez’s remains were visited by loved ones and confederates, an angry crowd attacked a Colombian TV reporter. “They beat us with helmets, with sticks, men, women, adults,” Carmen Andrea Rengifo said on RCN TV. Video images showed her bleeding above the forehead but she was not seriously injured. Maduro and other government officials have recently railed against international media for allegedly reporting rumors about Chavez’s health, though RCN was not among those stations criticized. After nightfall, several hundred people gathered at Bolivar Square, a symbolic place for Chavistas because it has a huge nine-meter-tall (30-foot-tall) statue of Simon Bolivar, the 19th century independence hero who Chavez claimed as his inspiration.

Some arrived singing Venezuela’s national anthem and holding up posters of Chavez. Many chanted “I am Chavez,” which had been a campaign slogan of the president. One man began shouting through a megaphone a warning to the opposition: “They won’t return.” The crowd then joined in, chanting: “They won’t return.” Maduro, who had urged people to meet at the square, called on the opposition to respect “the people’s pain.” “Those who never supported the comandante Hugo Chavez, respect the pain of the people. This is the moment to think of our families, of our country.”

Chavez leaves behind a political movement firmly in control of the nation, but with some doubt about how a new leadership will be formed. Chavez’s illness prevented him from taking the oath of office after he was re-elected to a new term on Oct. 7 and the constitution says the speaker of the National Assembly, Diosdado Cabello, should take over as interim president under such circumstances. But Jaua said Maduro would assume the rule as that was Chavez’s will. The man Chavez defeated in October, the youthful Miranda state Gov. Henrique Capriles, is widely expected to represent the opposition.

Venezuela’s defense minister appeared on television to announce that the military will remain loyal to the constitution in the wake of Chavez’s death. Adm. Diego Molero appealed for “unity, tranquility and understanding” among Venezuelans.
The announcement of Chavez’s death stunned Venezuelans, if it did not surprise them. Earlier in the day, Maduro was more belligerent in tone as he announced the government had expelled two U.S. diplomats from the country and said “we have no doubt” that Chavez’s cancer, which was first diagnosed in June 2011, was induced by “the historical enemies of our homeland.” He compared the situation to the death of the Palestinian leader Yasser Arafat, claiming Arafat was “inoculated with an illness.”

Chavez’s inner circle has long claimed the United States was behind a failed 2002 attempt to overthrow him, and he has frequently played the anti-American card to stir up support. Venezuela has been without a U.S. ambassador since July 2010 and expelled another U.S. military officer in 2006. U.S. State Department spokesman Patrick Ventrell rejected the assertion that the U.S. was trying to destabilize Venezuela and said it “leads us to conclude that, unfortunately, the current Venezuelan government is not interested in and improved relationship.” Maduro has been taking on a larger role since Chavez urged Venezuelans to choose him as president before disappearing in early December to undergo a fourth round of cancer surgery in Cuba.

He accused U.S. Embassy Air Force attache Col. David Delmonaco of spying on Venezuela’s military and seeking to involve officers in “destabilizing projects.” Maduro gave Delmonaco 24 hours to leave, and U.S. officials said he had already left the country. Maduro said Tuesday that the government was “on the trail of other elements that figure in this entire venomous scenario and are seeking to stir up trouble.” Later Tuesday, Jaua said a second U.S. Air Force attaché was being expelled, also for alleged espionage. The Pentagon said the officer, Devlin Costal, was already in the United States. “Let’s remember that active participation of the United States in the fascist coup of 2002,” Jaua said. Chavez has run Venezuela for more than 14 years as a virtual one-man show, gradually placing all state institutions under his personal control. But the former army paratroop commander, who rose to fame by launching a failed 1992 coup, never groomed a successor with his same kind of force of personality.

The campaign for the upcoming election to replace him, though undeclared, has nevertheless already begun. Maduro has frequently commandeered all broadcast channels, Chavez-style, to tout the “revolution” and vilify the opposition.
Maduro on Tuesday repeated government claims that Capriles met in the United States over the weekend with right-wing U.S. conspirators and was planning to meet over the weekend with Roberta Jacobsen, assistant U.S. secretary of state for the hemisphere. One personality on state TV also accused the Capriles family of buying a New York City apartment with stolen funds. Capriles responded via Twitter Tuesday by calling Maduro a liar. “Lie after lie in every speech,” he said. Chavez had neither been seen nor heard from, except for photos released in mid-February, since submitting to a fourth round of surgery in Cuba on Dec. 11 for an unspecified cancer in the pelvic area. It was first diagnosed in June 2011. The government said Chavez returned home on Feb. 18 and was confined to the military hospital since. Maduro said last week that the president had begun receiving chemotherapy around the end of January. – Yahoonews

Slowdown boon: Buy a car and get Another Free