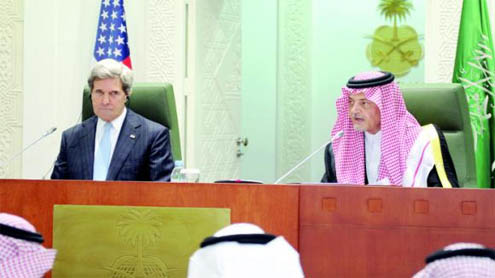 Saudi Arabia strongly defended its decision to arm the Free Syrian Army yesterday as the Kingdom and the US presented a united front on Tehran and Damascus.

They warned Syrian President Bashar Assad that they would boost support to the opposition fighting to oust him unless he steps down.They put Iran’s leadership on notice that time is running out for a diplomatic resolution to concerns about its nuclear program.US Secretary of State John Kerry said the window of opportunity for a diplomatic solution to the Iranian nuclear problem “cannot by definition remain open indefinitely.”Kerry said he and Foreign Minister Prince Saud Al-Faisal discussed “our shared determination to prevent Iran from acquiring a nuclear weapon.”

Both leaders told reporters at a joint news conference that Assad must understand that recent scud missile attacks on the opposition in Aleppo would not be tolerated by the international community and that he had lost all claim to be Syria’s legitimate leader.Prince Saud said Saudi Arabia could not ignore the brutality Assad is inflicting on his people, even after two years of escalating violence. He said that history had never seen a government use strategic missiles against its own people. “This cannot go on,” he said. “He has lost all authority.”

The prince added: “Saudi Arabia will do everything within its capacity, and we do believe that what is happening in Syria is a slaughter, a slaughter of innocents,” he said. “We can’t bring ourselves to remain quiet. Morally we have a duty.”Kerry criticized Iran, Hezbollah and Russia by name for giving weaponry to the Assad regime.In addition to Crown Prince Salman, deputy premier and minister of defense, Kerry met in Riyadh with the foreign ministers of Kuwait, Bahrain and Oman, all of whom are equally wary of Iranian intentions.Kerry also saw Palestinian leader Mahmoud Abbas, who is visiting Saudi Arabia.

Prince Saud called on the international community to extend help to the Syrian people to “exercise their legitimate right to defend themselves against the regime’s killing machine.”Kerry, who was on his first visit to the Kingdom as secretary of state, said the US will “continue to work with its friends to solve the Syrian crisis.” Kerry, who arrived here Sunday night, was also welcomed by Crown Prince Salman, deputy premier and minister of defense. He later flew into Abu Dhabi for consultations with Emirates leaders.

In his talks with Crown Prince Salman, the secretary of state conveyed the greetings of President Barack Obama to Custodian of the Two Holy Mosques King Abdullah. The talks were attended by Prince Saud, Prince Mohammed bin Salman, chief of the Crown Prince’s court; Adel Al-Jubeir, Saudi ambassador to the US; and James B. Smith, American ambassador. Prince Salman also received Palestinian President Mahmoud Abbas here yesterday.At the press conference Prince Saud referred to the progressively growing ties between Saudi Arabia and the US and said the Kingdom and the US are in “a better position to cooperate in the political spheres and confront many regional and global challenges, which we discussed in depth at our meetings.” He spoke about the age old Saudi-US ties in the field of commerce and education.

Prince Saud said he and his American counterpart discussed the Syrian crisis in light of a recent meeting in Rome. He said the Rome meeting pledged more political and material support for Syrian National Coalition as the legitimate representative of the Syrian people.For his part, Kerry supported any move or effort to help Syrian people except arming the opposition. In reply to a question about reports of arms being sent to fighters in Syria, Kerry replied: “The moderate opposition has the ability to make sure that the weapons supplied to them don’t fall into wrong hands.”

However, he added, “there is no guarantee that one weapon or another might not fall in the wrong hands.” The US has so far refused to arm rebels locked in a two-year war against Assad’s loyalists.Referring to the US-Saudi cooperation in the fight against terrorism, Prince Saud said that the two countries had been working closely on this front and this cooperation has yielded tangible results.Asked about the specifics of his talks with Kerry, the foreign minister said his discussions with the top US diplomat focused on regional issues, the global financial crisis and a range of bilateral issues.

On Iran, Prince Saud said the international community supports all efforts to resolve the crisis diplomatically and ensure Iran’s use of nuclear energy for peaceful purposes in accordance with procedures of the International Atomic Energy Agency. “We hope that negotiations will result in a radical solution to this crisis,” he added.On the Middle East peace talks, Prince Saud said the Kingdom would exert all efforts with all friendly nations to ensure a “durable and comprehensive solution” leading to the establishment of an independent and viable Palestinian state within the framework of an independent two-state solution.

Kerry said there is need to take steps to boost the peace process.Kerry also met over lunch yesterday with Mahmoud Abbas, who flew into the Saudi capital on Sunday night. Kerry’s tour does not include Israel or the Palestinian territories. In his talks with Kerry, Abbas presented the Palestinian point of view to the new secretary of state ahead of Obama’s visit to Palestine on March 22.Referring to the situation in Yemen, Prince Saud thanked the US administration for helping the GCC-brokered initiative that ensured security, stability and national unity in that country.”We look forward to continuing this support and we hope that the United States will extend its support to the forthcoming London conference of Friends of Yemen,” he added. – ArabNews

India budget has missed the bus

India budget has missed the bus