10 Things to Know for Tuesday 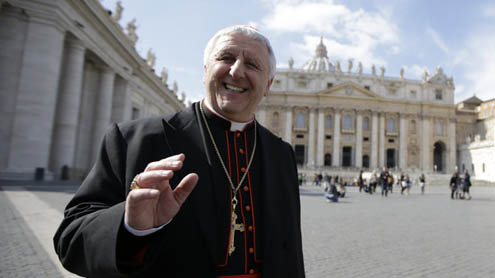 10 Things to Know for Tuesday

Your daily look at late-breaking news, upcoming events and the stories that will be talked about Tuesday:

1. WHAT CATHOLIC CARDINALS SAY IS THEIR TOP PRIORITY

Before picking a new pope, they want to know more about the alleged Vatican corruption, nepotism and cronyism that was revealed last year.

House Republicans have crafted a spending plan aimed partly at cushioning the Pentagon from cuts.

3. WHY CHINA WATCHERS ARE ON ALERT

The national legislature’s annual session will give clues as to whether China’s new leader can make good on his promise to create a fairer society.

A baby — delivered by cesarean after his parents were killed in a hit-and-run crash in New York City — has also died, the medical examiner says.

5. CALIF. NURSE REFUSES TO PERFORM CPR ON A DYING WOMAN

Staffer was following policies of the independent living home, which says to call emergency personnel and wait.

6. WHERE WOMEN’S LIFE EXECTANCY IN THE US IS FALLING

The pattern is detected in nearly half of counties, especially in the South and West.

Assailed as racist, separate transport appeals to at least one passenger in the West Bank: “Riding with settlers is humiliating, and involves a lot of suffering.”

9. SEEING RED OVER ‘BULLFIGHTING WITH CARS’

Havana officials spread word of the dangers of jaywalking, which injures some 1,300 people each year in Cuba’s capital.

10. ‘LIVING FREE OFF THE KINDNESS’ OF OTHERS

Casey Anthony — who owes hundreds of thousands of dollars to lawyers, the IRS and various creditors related to her murder case — tells a bankruptcy court she subsists on charity. – YahooNews

China lays out economic blueprint for 2013