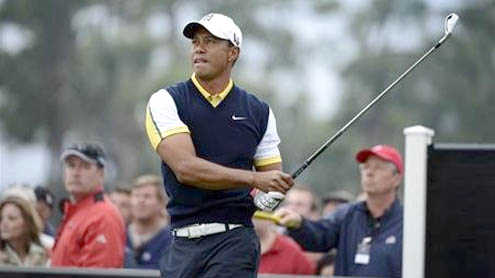 Florida: Tiger Woods, who has endured his share of controversy and media scrutiny, said world number one Rory McIlroy should choose his words more carefully after withdrawing from the Honda Classic with what was initially a mysterious explanation.

Before driving away from the PGA National course on Friday after a nightmare start to his round, McIlroy told reporters: “I’m not in a great place mentally. I can’t really say much, guys. I’m just in a bad place mentally.”Later, in a statement, the 23-yerar-old Northern Irishman said he was having pain with a wisdom tooth and that he was unable to concentrate.Former world number one and 14-times major winner Woods was asked after his second consecutive even-par 70, whether he had talked to McIlroy about handling the media focus.

“He’s just got to be more ‑‑ just got to think about it a little bit more before you say something or do something,” said Woods. “It can get out of hand, especially when you get into social media and start tweeting and all those different things that can go wrong.”Woods has seen both sides of the media, having been elevated to superstar status during his glory years and then watching his marriage fall apart in the public eye after a series of affairs came to light.

He has also had to deal with constant questioning of his ability to get back to his best, changes of coach, re-worked swing and injuries that led him to withdraw from tournaments.Woods is 14 years McIlroy’s senior and says the media is a very different beast to when he first become world number one and was the center of attention.”I’ve been through it for a long time. But also this is a slightly different era, as well. It’s even faster than what it was when I came out,” said Woods. “Things are instantaneous around the world. We were still in fax machines, things were a little bit slower.”

With his disappointing early season form, the focus on McIlroy will quickly refocus to his recent change to Nike clubs and his self-confessed swing troubles.Woods managed to refrain from firing back at his critics throughout his difficulties in making a transition and said he did so because he knew that many of those commenting on his game were lacking the right knowledge.”That’s just because people don’t understand. Most of the people that are commentating or analyzing don’t understand the game of golf, so I didn’t have a problem with it,” said Woods.”They don’t see it. They don’t see the range sessions and they don’t see the practice at home. Plus, they generally don’t understand the game, especially at this level.” – YahooNews