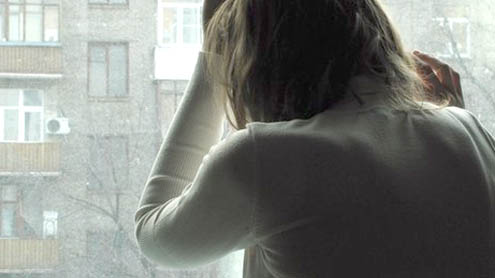 Thousands of women in Russia die each year as a result of domestic violence, according to official estimates. But despite many years of discussions, domestic abuse is still not recognised as a crime and this hampers help for the victims, reports BBC Russian’s Oleg Boldyrev in Moscow.

Anya has a lot on her mind. In a small, sparsely-furnished room, she is trying to get her two boys, aged four and seven, to take their afternoon nap.It is not the easiest of tasks at the best of times, and is even more difficult in her temporary home – a room in a shelter for women victims of domestic violence.Her story is typical. During her seven-year marriage, she was frequently beaten or verbally abused.She lived in fear, not knowing where to seek help. When at last she decided to lodge a complaint with the police, several years ago, she was told little could be done about her husband as “it was his home”.

“It’s been a nightmare, but a silent one,” she says.”For a while, I couldn’t leave my children alone, and couldn’t go to the hospital to report my injuries. Then I was waiting for the children to grow up, so they could confirm to the police what had been happening. Then I started to make recordings, I taped what was going on.”But it’s no use. The police don’t want to deal with it. Once, a policewoman came in and said: ‘Why don’t you just run away like I did?’ So even policewomen have to deal with this…”Anya divorced her husband two years ago, but, unable to afford her own home in Moscow, continued to share the family flat with him.

The last rounds of beatings came in mid-January: “I came back with the children from a circus performance. I was really tired, but he wouldn’t let me sleep. I told him to stop, and that’s when he started beating me.”The 35-room refuge on the edge of Moscow is the only option for her and many others who find themselves in a similar situation.No-one knows exactly how many Russian women need a shelter like this. Despite almost two decades of discussion and debates, domestic violence is not classified as a crime and there are no national statistics.But according to estimates, based on studies in a few selected regions conducted by the Russian interior ministry, a shocking 600,000 women in Russia are facing physical and verbal abuse at home every year.

Out of those, 14,000 die from injuries inflicted by husbands or partners. That is almost 40 a day.Given these figures, demand for safe houses like the one Anya went to must be very high. Yet, in Moscow, a city of 12 million, there is only one state-funded refuge.It is surprising to hear its managers say that capacity is not a big issue. They argue that with another shelter like theirs coming in the near future, Moscow’s demand for safe houses will be met.The bigger problems, according to them, are the women’s confusion and lack of information.During their time in the shelter – each visitor is allowed to stay for two months – the women have to find a way out of the crisis they face, while dealing with often complicated legal procedures.We can help them with the legal paperwork, we provide psychological assistance, but first and foremost it’s the person’s responsibility to decide on a way forward,” says Natalia Pazdnikova, the shelter’s director.

“We’re here to help in a crisis, but we meet women who are perpetually in crisis and who are waiting for us just to keep giving them something.”But it comes as no surprise that, while trying to find justice, abused women are left feeling bewildered or powerless.Getting proof of abuse can be difficult both emotionally and in obtaining documented evidence – and, as in Anya’s case, police can be of little help.Victims say that, very often, instead of registering a complaint for assault, officers will ask the woman to “think it over” to ensure she does not withdraw it a day or two later, following pressure from husbands or relatives.

But police inspector Andrei Levchuk disagrees, saying that he and his colleagues follow all procedures. Inspector Levchuk’s patch covers around 30 apartment blocks in the north-west of Moscow. Domestic violence, along with burglary and car theft, is one of the most common issues in the area.Capt Levchuk says that typically, not witnessing violence at the spot, all policemen can do is to caution the presumed offender. This caution does little to prevent future aggression.”Sometimes the wife says ‘Please, frighten him so he won’t do it again’. “Well, we’re not scarecrows to frighten people like that. We can tell the husband that he’ll be in trouble if he does it again, he would nod, he would say he understands, but God knows what goes on when they close the door,” he says.

He thinks the now defunct Soviet system of cautioning, which allowed courts to remove offenders for up to two weeks for a form of community service, would serve as a good deterrent.The inspector admits that in a majority of cases the injuries sustained by victims of abuse are not sufficient to launch criminal investigation and the best the police can do is to advise a victim to file a petition for a private case.And for human rights activists this is one of the most pressing issues.According to Russian law, in private cases it is the claimant’s responsibility to prove that she has been abused.

“This violence happens in cycles, becoming more severe with each cycle. At that point many women suffer from battered-person syndrome which means that they will not seek help,” explains Marina Pisklakova, founder of Anna, Russia’s oldest non-governmental organisation dealing with the issue.Cases of domestic violence only become criminal cases if the police are able to establish that injuries have been serious or severe – or that death has occurred: “It becomes a criminal case when it’s almost too late to respond to domestic violence,” Ms Pisklakova says.

Slowly, the public perception of this issue is changing, says Ms Pisklakova: “Twenty years ago, in every chat show which raised this issue, the audience or hosts were asking: ‘What’s wrong with those women, what have they done to deserve this beating?'”There has been a change in the mentality, she says: “Now every journalist I talk to asks: ‘What do we do to change this?'”But years of campaigning for a law which would recognise domestic abuse as a specific crime have so far brought no result.After more than a decade of discussion, the draft law on domestic violence has still not been introduced in parliament. Ms Pisklakova hopes the Duma may start discussing it this year. – BBC