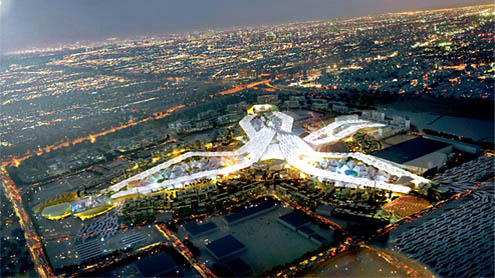 The unparalleled growth, which has seen Dubai rise from the status of a tiny port to the world hub of trade, travel and tourism, exemplifies the great vision and ensuing actions of the emirate’s government.

Singling out the contributions of the civic body of the emirate, one can vouch for the fact that the Dubai Municipality is capable and well-equipped to provide the best of civic amenities and services to the city as it is galloping towards hosting the World Expo 2020.An integral part of the infrastructure committee for urban planning, the municipality’s role in taking Dubai’s master plan for urban development to its next level, is undoubtedly significant.

According to senior officials of the civic body, there are clear-cut strategic plans to further develop the city’s  infrastructure catering to the growing demand, and at the same time, preserving the environment and providing adequate public services and amenities with a balanced use of land.

With a strength of 11,100 employees under 44 organisational units, developing the proposed site for the Expo 2020 in Dubai Trade Centre, Jebel Ali, is of paramount importance to the Dubai Municipality. The General Projects Department that has completed several prestigious projects in Dubai, including the Hamdan bin Mohammed bin Rashid Sports Complex that hosted the 10th FINA World Swimming Championships, is certain to have a leading role in developing the new areas in the emirate.

“There is no doubt that Dubai can come up with the complete infrastructure and facilities for hosting this prestigious event much before the target, as we have always excelled in beating expectations and overcoming challenges,” said Khalid Ali bin Zayed, Assistant Director-General for International Affairs at Dubai Municipality and the spokesperson for the Expo 2020 bid.

The way Dubai has been accommodating the influx of residents and visitors from across the globe has always been cited as an example for its multiculturalism. Analysing it on a microscopic level, one can find that the way millions come and go every year without affecting the normal life of the city is actually an example of its capability in hosting and delivering the best for an event like the World Expo. Already the leading city in Asia for the meetings, incentives, conferences and exhibitions (MICE) industry, Dubai has time and again proved its mettle in simultaneously hosting international events at its prestigious venues.

Starting from the hassle-free visa procedures and tax-free market, a series of attractive services have made Dubai a favourite destination for individuals of all nationalities. Almost all civic services offered by the municipality have gone online as the civic body is inching towards its goal of “zero visits” to the municipal centres by its customers.First-rate hotels, malls and venues of leisure and entertainment have added to the attractions offered by this magical city.

“People of 200 nationalities living harmoniously without any cultural issues are definitely one of the biggest assets of the emirate. Having them here itself is like hosting the entire world here throughout the year,” said Khalid Ali.There is no doubt that the Dubai Municipality plays a significant role in making the cultural and social excellence enjoyed by citizens and residents of Dubai. The civic body’s vision itself is “creating an excellent city that provides the essence of success and comfort of sustainable living”.

From ensuring the safety of the food industry and public health to the management of waste and sewage, the Dubai Municipality has been offering excellent services to make life in the emirate easy and safe for nationals and expatriates alike.

The host of initiatives taken to improve the food safety culture and standards in Dubai has earned international reputation for the Food Control Department of the municipality. The department has been partnering with international bodies like the World Health Organisation and the US Centres for Disease Control and Prevention in introducing several preventive and proactive measures against food-borne illnesses.

In an era when countries depend largely on imported food products, regulations implemented by the department are expected to help accurately track down the source of contamination and drastically cut down the food wastage due to violations of local requirements by importing companies.“Dubai is confident that its residents and visitors enjoy excellent standards in food safety. The vast variety of cuisines available here and the high standards of safety in Dubai’s food sector have made it a favourite place for food connoisseurs,” the DM official said.

Apart from food safety, public health in general has been the focus of the municipality’s services. An internationally acclaimed laboratory that ensures the safety of all the products that reach the Dubai market is an asset for the city. The Department of Public Health has been at the forefront of implementing the highest levels of safety standards in various industries, especially the construction industry that has changed the face of Dubai from a desert village to the Manhattan of the Middle East in just a few decades.

Home to the tallest building in the world, Burj Khalifa, Dubai is now taking the construction activities in the emirate to a more sustainable level. With the aim of paving the way for a sustainable city in future, the municipality has started implementing the Green Building Code. An exhaustive emergency preparedness plan and disaster management plan are also in place to guarantee the safety of the people even amidst any possible crisis.

“We are not just focusing on the new buildings and skyscrapers that are coming up. Dubai is very much rooted in its culture and tradition and has a clear strategy for preserving its ancient buildings and heritage sites,” Khalid Ali said.Currently, the Architectural Heritage Department of the municipality is working with the Unesco to include the historical sites and heritage areas along the Dubai Creek, surrounding Bastakiya and Shindagha, in the list of World Heritage Sites.

There are ongoing efforts to preserve the wetlands of Ras Al Khor Wildlife Sanctuary, the UAE’s first Ramsar Site.The taskforce developing the central business area has concrete plans to implement a comprehensive sewage and drainage network to cater to the demands of the city till 2020.

Ensuring environmental safety of the whole of the emirate is a collective task of the various departments of the civic body. The Environment Department has already embarked on a major venture that will see “cool and green” initiatives being adopted in the ‘hotspots’ of the emirate. This came after an extensive, mid-air thermal mapping project which helped to determine the temperature in the emirate and identify the areas experiencing more heat due to urban developmental activities. The Green Roof project is another initiative with similar objectives.

The Car-Free Day and the Clean up the World campaign are the popular annual initiatives of the municipality that have been gathering public support in helping cut down the carbon emission and reducing waste generation.Another environmental project of the municipality, being implemented by its Park and Horticulture Department, is to increase the green areas in Dubai annually. Over 2.5 million sq ft of land is earmarked yearly for building parks, playgrounds and landscaped areas.

To meet this target, the department has been actively taking part in tree plantation campaigns and adding a number of parks to the existing dozens every year. Apart from providing ultimate recreational facilities, the parks in Dubai are also contributing in energy conservation by using solar energy.With twinning agreements and collaborations with several major cities in the world, the Dubai Municipality that represents Dubai in local and international arenas, has over 100 international awards and numerous local and regional awards to its credit.

“The vision of the Dubai Municipality has helped change the face of the city in a drastic way in the past few decades. With a focused strategy and clear vision, we are sure that the civic body can bring in several more projects and initiatives that will make Dubai a perfect place to host an event like the World Expo,” said Khalid Ali. – KahleejNews