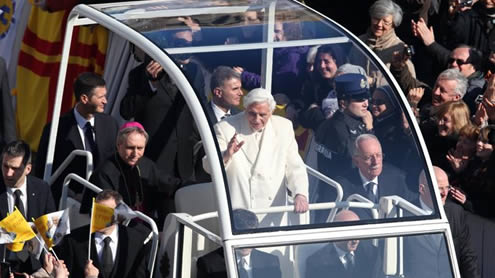 VATICAN CITY — Pope Benedict XVI greeted the Catholic masses in St. Peter’s Square Wednesday for the last time before retiring, making several rounds of the square as crowds cheered wildly and stopping to kiss a half-dozen children brought up to him by his secretary.

Tens of thousands of people toting banners saying “Grazie!” — “thank you” — jammed the piazza to bid farewell to the pope at his final general audience — the appointment he has kept each week to teach the world about the Catholic faith. Pilgrims and curiosity-seekers picked spots along the main boulevard leading to the square to watch Wednesday’s event on giant TV screens. Some 50,000 tickets were requested for Benedict’s final master class, but Italian media estimated the number of people actually attending could be double that.

“It’s difficult — the emotion is so big,” said Jan Marie, a 53-year-old Roman in his first years as a seminarian. “We came to support the pope’s decision.” With chants of “Benedetto” erupting every so often, the mood was far more buoyant than during the pope’s final Sunday blessing and recalled the jubilant turnouts that often accompanied him at World Youth Days and events involving his predecessor, Pope John Paul II. Benedict on Thursday will become the first pope in 600 years to resign, a decision he said he took after realizing that, at 85, he simply didn’t have the strength of mind or body to carry on. He will meet Thursday morning with cardinals for a final time, then fly by helicopter to the papal residence at Castel Gandolfo south of Rome.

There, at 8 p.m., the doors of the palazzo will close and the Swiss Guards in attendance will go off duty, their service protecting the head of the Catholic Church over — for now. Many of the cardinals who will choose Benedict’s successor were in St. Peter’s Square for his final audience, including retired Los Angeles Cardinal Roger Mahony, object of a grass-roots campaign in the U.S. to persuade him to recuse himself for having covered up for sexually abusive priests. Mahony has said he will vote. Vatican officials say cardinals will begin meeting on Monday to decide when to set the date for the conclave to elect the next pope.

But the rank-and-file in the crowd on Wednesday weren’t so concerned with the future; they wanted to savor the final moments with the pope they have known for eight years. “I came to thank him for the testimony that he has given the church,” said Maria Cristina Chiarini, a 52-year-old homemaker who traveled by train early Wednesday from Lugo, near Ravenna, with some 60 members of her parish. “There’s nostalgia, human nostalgia, but also comfort, because as a Christian we have hope. The Lord won’t leave us without a guide.” – Yahoonews