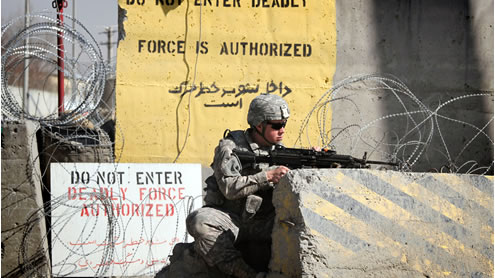 WASHINGTON – The NATO-led force in Afghanistan said on Tuesday it had incorrectly reported a 7 percent drop in the number of attacks by Taliban insurgents last year, acknowledging that in fact there had been no decline in the closely watched statistic.

The disclosure raises questions about recent U.S. claims of progress in the costly, unpopular war. It also serves as a reminder of Taliban resiliency as withdrawing U.S. and NATO forces prepare to declare the combat mission over at the end of next year.

NATO’s International Security Assistance Force, or ISAF, pointed to a record-keeping mistake which failed to take into account some data from Afghan forces, which are increasingly bearing the brunt of the conflict as Western forces move into a support role. After updating the figures, last year’s 7 percent decline in so-called enemy-initiated attacks – key data used to help assess progress in the war – was shown to have instead remained unchanged between 2011 and 2012, ISAF said.

“This was a record-keeping error that we recognized and have now corrected,” an ISAF spokesman said. Pentagon spokesman George Little called the error regrettable and played down the impact on the overall upbeat assessment of progress in America’s longest war. “In spite of the stated adjustment, our assessment of the fundamentals of progress in Afghanistan remains positive,” Little said. During a December trip to Kandahar, Defense Secretary Leon Panetta noted that “we’ve seen levels of violence go down” in Afghanistan, vague comments that could refer to a number of indicators, not only enemy-initiated attacks.

Little, speaking to reporters at the Pentagon, said broad trends were headed in the right direction, with 80 percent of the violence in Afghanistan occurring in areas where less than 20 percent of the Afghan population lives. The number of U.S. casualties this year is also down sharply from the start of 2012. At the same time, however, casualties among Afghan forces have risen. The United States and its allies are currently weighing how large a residual force to leave in Afghanistan after the vast majority of western troops, now numbering around 100,000, withdraw by the end of next year.

Last week, defense chiefs meeting in Brussels discussed keeping a force of 8,000 to 12,000 troops in the country, the Pentagon said, stressing that no decisions had been made. A senior NATO official said last month that the United States expects other NATO allies to contribute between a third and half the number of troops Washington provides. – Yahoonews