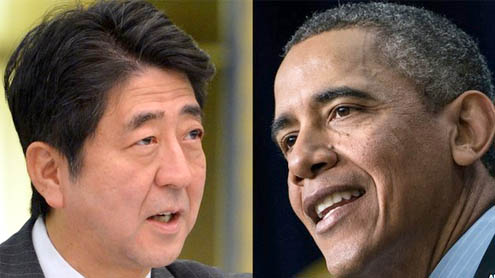 Japanese Prime Minister Shinzo Abe has arrived in the US for talks to fortify a key security alliance between the two nations.

Mr Abe, who was elected in December, will meet US President Barack Obama later on Friday in Washington.Both tensions with Beijing over a territorial dispute and North Korea’s recent nuclear test are expected to top the agenda.Economic ties, including an Asian trade deal, will also be discussed.Mr Abe is the fifth Japanese prime minister that Mr Obama has met in office. Mr Abe is serving as Japan’s top leader for a second time, after a brief period in power in 2006-7.His visit is seen as a bid to shore up a security alliance between the two countries that goes back decades.

Ties were strained somewhat under the previous Democratic Party (DPJ) administration amid a row over the relocation of a US military base in Okinawa.But Mr Abe, who heads a Liberal Democratic Party administration, has spoken out about the need to prioritise the Japan-US alliance amid a changing regional dynamic. Ahead of his visit Mr Abe gave an interview to the Washington Post newspaper, saying that improved ties with Washington were top of his agenda.On the bitter row with China over disputed islands in the East China Sea, he said US support was key.

“It is important for us to have them recognise that it is impossible to try to get their way by coercion or intimidation,” Mr Abe said, referring to China.”In that regard, the Japan-US alliance, as well as the US presence, would be critical.”Both Beijing and Tokyo have ships in waters around the islands – known as Senkaku in Japan and Diaoyu in China – leading to fears of a clash. Japan controls the islands, which are also claimed by Taiwan.The US has urged restraint from both sides, while Chinese state media has warned the US against taking sides in the dispute.

Mr Obama’s top Asia advisor, Danny Russel, said on Thursday that the president “remains supportive of the peaceful efforts to find diplomatic resolution to outstanding issues of territorial claims”, AFP reports.He added that Mr Obama has “been clear in the United States’ opposition to coercive actions or unilateral steps that threaten the stability of the region”.On North Korea, both sides back action against Pyongyang in the UN Security Council in the wake of its third nuclear test, on 12 February.

Economic ties are also expected to be on the agenda for the meeting.The two leaders are expected to discuss the Trans-Pacific Partnership (TPP), a proposal for a free-trade agreement between countries in North America, Asia and South America.Japan has discussed becoming part of the TPP over the years. But this has been met with opposition from farmers, who say that tariff removals will have an a negative impact on their industry. – BBC