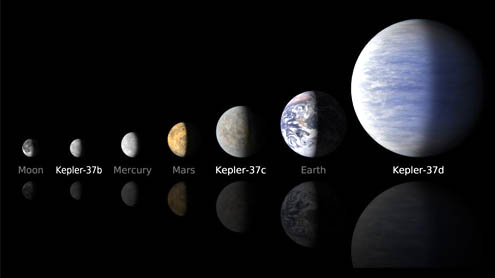 Astronomers on Wednesday said they had found the smallest planet ever spotted beyond our Solar System, a scorched and uninhabitable mini-world tinier than Mercury.

The planet is the innermost of three that orbit a Sun-like star called Kepler-37, named after the Kepler telescope, which was launched in 2009 with the quest of scrutinising the Milky Way for other worlds.Kepler monitors more than 150,000 stars, analysing their light for a characteristic “wobble” caused by the gravitational tug of a planet that passes just in front of the star.

Dubbed Kepler-37b, the little world is smaller than Mercury, the innermost and smallest planet of our Solar System, and just a tad bigger than the Moon at a third the size of Earth.“Kepler-37b is probably rocky with no atmosphere or water, similar to Mercury,” according to the study, headed by Thomas Barclay of NASA’s Ames Research Center.

The findings appear in the journal Nature.A total of 699 extrasolar planets have been found since the first was spotted in 1995, according to a toll compiled by the website http://exoplanets.org.Another 2,222 findings by Kepler await confirmation.So far, none of the sightings is a potential home from home — a rocky planet that orbits in a balmy zone, enabling water to exist in liquid form and thus nurture life as we know it. – KahleejNews