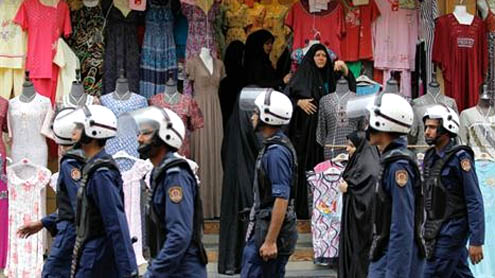 Bahrain has wagged a finger at Teheran for allegedly training and mentoring a terror cell it busted last weekend and said the Iranian Revolutionary Guards were actively involved in stoking trouble in the kingdom.

Major-General Tariq Al Hassan, Chief of Public Security, said eight suspects, who were rounded up last month, were receiving orders from the Revolutionary Guards in Iran and had targeted sensitive locations and public figures in Bahrain. Four members of the squad are on the run.  He said the group comprised both Bahrainis and outsiders and the arrests were made in Oman and Bahrain.

Investigations showed that the armed group used the name, ‘Army of the Imam’, Major General Al Hassan told a Press conference on Tuesday night. “The Bahrainis were recruited to collect information on public figures and take photographs of sensitive locations.”Its members were also trained in the use of weapons and explosives, gathering more members, writing surveillance reports and monitoring senior officials. “They were trained by the Iranian Revolutionary Guards and the Lebanese Hezbollah in Iraq’s Karbala and Baghdad,” Major-General Al Hassan said.

He claimed an Iranian operative going by the name of Abu Nasser paid the men a sum of $80,000 to spread violence in the kingdom.Major-General Al Hassan claimed the suspects travelled to Iran, Iraq and Lebanon and avoided taking direct flights to and from Bahrain. “The suspects confessed to having been recruited through two Bahrainis nicknamed Mirza and Aqeel who were based in Qom, Iran,” the official said. Ali Al Samahiji, the first suspect who was arrested, was recruited to join the group when he was in Iran. “He handled the recruitment of more Bahrainis under the supervision of Mirza and Aqeel.”

He said security agencies are continuing their investigation into the case which has been referred to the public prosecutor. On Saturday, Bahraini Interior Minister Shaikh Rashid bin Abdullah Al Khalifa said a ‘terrorist cell’ linked to Iran, Iraq and Lebanon had been dismantled. – KahleejNews