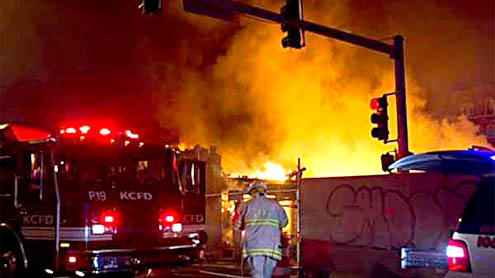 KANSAS CITY: An official says 14 people have been confirmed as injured in a massive gas explosion in an upscale Kansas City shopping district.

Kansas City Manager Troy Schulte says officials don’t yet know if anyone was killed in the explosion, which destroyed JJ’s restaurant.Authorities also are still trying to determine the full cause of the blast. Schulte says they do know there was a gas leak followed by an explosion. At this point, he says authorities believe it may have stemmed from an accident involving a utility contractor.Earlier police spokeswoman Rhonda Flores said it appeared that a car crashed into a gas main near JJ’s just after 6 p.m.People have been cleared from the area around the restaurant. – YahooNews