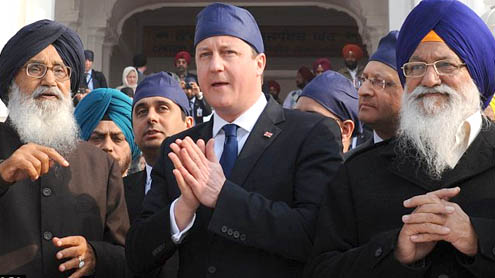 David Cameron today expressed remorse for the 1919 Amritsar massacre, denouncing the killing as ‘deeply shameful’ as he visited the scene of the worst single atrocity of the British Empire.

Writing in a memorial book for the victims of the massacre, he said: ‘We must never forget what happened here.’Mr Cameron, the first sitting Prime Minister ever to visit Amritsar, went far further than the Queen, who visited in 1997, in voicing regret for the slaughter in which 379 people were officially said to have died but which Indians believe claimed 1,000 lives.However, he did not fully apologise or use the word ‘sorry’ during his visit to the garden at Jallianwala Bagh, where the killings took place.Before visiting the massacre site, the Prime Minister toured the city’s Golden Temple, the holiest site in the Sikh religion, barefoot and wearing a blue bandana.

He went to the temple kitchens which feed thousands of pilgrims every day, and tried his hand at flipping chapatis.When he moved on to the gardens, he laid a wreath on the memorial and wrote in the condolence book: ‘This was a deeply shameful event in British history, one that Winston Churchill rightly described at the time as ‘monstrous’.’We must never forget what happened here, and in remembering we must ensure that the United Kingdom stands up for the right of peaceful protest around the world.’The massacre, dramatically recreated in the film Gandhi, is seen as the low point of the Raj and one of the reasons Mahatma Gandhi’s non-violent protest movement gathered support for independence.

Mr Cameron was shown around the memorial site by descendants of some of those who came under fire from troops under British command in 1919.They pointed out a wall covered in bullet holes from the shooting, and the Martyrs’ Well where many of the victims died while seeking shelter from the gunfire.Speaking after the visit, the memorial’s secretary Sukumar Mukherjee, whose grandfather survived the shootings, was asked if Mr Cameron’s words made up for his lack of a formal apology.Asked why he decided not to apologise, Mr Cameron said: ‘In my view we are dealing with something here that happened a good 40 years before I was born, and we are dealing with something that… the British government rightly condemned at the time.

‘I don’t think the right thing is to reach back into history and to seek out things that we should apologise for. I think the right thing to do is to acknowledge what happened, to recall what happened, to show respect and understanding for what happened.He added: ‘I am proud to be the first British Prime Minister to visit the Golden Temple and see what an extraordinary place it is – very moving, very serene, very spiritual.’The Queen and Prince Philip visited the scene in 1997, where the Queen issued a carefully calibrated statement referring to ‘moments of sadness and moments of gladness’ in Britain’s relationship with India.

But the Duke of Edinburgh sparked controversy when he dismissed Indian claims that the number of fatalities was actually around 1,000 as ‘vastly exaggerated’.On April 13, 1919, local Army commander Brigadier-General Reginald Dyer ordered around 50 riflemen to open fire on a group of up to 20,000 people when they met in defiance of a ban on public meetings.In the ten-minute bloodbath 1,650 rounds were fired before their ammunition was exhausted. Official Government of India figures estimated the fatalities at 379, with another 1,500 wounded.Aides say Mr Cameron believes it was a ‘deeply shameful’ event in Britain’s past but stress that he is keen to concentrate on the future, building a new relationship based on trade.

The prime minister also hopes to drum up support for the Tory Party from the 800,000-strong Sikh community, whose votes are key in North and West London and the East Midlands.Ahead of his visit to Amritsar, Mr Cameron said: ‘So many British people can trace their roots to this part of northern India. Punjabis make an extraordinary contribution to British life.‘Sikhism is one of the key faiths not just of India, but of Britain now too.’And I cannot wait to see the Golden Temple in Amritsar, which I believe is one of the most beautiful and extraordinary places of worship in the world.

‘And yes, there are ties of history too – both the good and the bad. In Amritsar, I want to take the opportunity to pay my respects at Jallianwala Bagh.‘This visit to Punjab is what my visit to India is all about – strengthening and deepening the ties between our two countries.’Officials said that unlike the apologies Mr Cameron has issued for the Bloody Sunday massacre in Northern Ireland and the Hillsborough tragedy, the British state has already admitted it was at fault after Amritsar.

Winston Churchill branded the events in Amritsar ‘monstrous’, while former prime minister Herbert Asquith called it ‘one of the worst outrages in the whole of our history’.Downing Street is keen to avoid the ridicule that Tony Blair attracted by apologising for the sins of previous generations, including the Irish potato famine and the slave trade.Mr Cameron’s great-grandfather voted to reject calls to cut the pension of the Secretary of State for India after the Amritsar massacre.Sir William Arthur Mount, a Tory MP, was present in Parliament in July 1920 when the Commons debated whether to dock £100 from the pension of Edwin Montagu.Sir William was the grandfather of Mr Cameron’s mother, Mary. – DailyMail