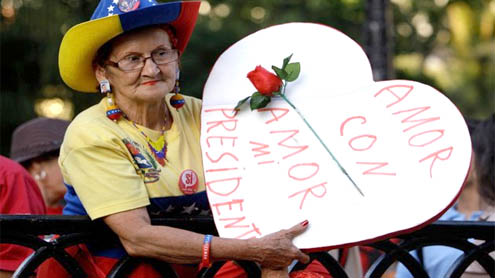 CARACAS, Venezuela:  Hugo Chavez’s sudden return to Venezuela after more than two months of cancer treatments in Cuba has fanned speculation that the president could be preparing to relinquish power and make way for a successor and a new election.

The government is insisting that Chavez remains in charge, playing an upbeat jingle on state television Tuesday with the message: “He’s back, he’s back!” But political analysts said he could soon take the oath of office in a delayed swearing-in ceremony as a first step toward a formal resignation, and a transition of power. Taking the oath, however, wouldn’t be required for the country’s congress and Supreme Court to call a new election.Chavez remained silent and out of sight a day after his return was announced on his Twitter account Monday. The government said he was continuing unspecified medical treatments at Caracas’ military hospital.

“The big question, beyond where the president is, is whether the president is capable of governing,” said Mariana Bacalao, a professor of public opinion at the Central University of Venezuela. She said it seems unlikely that Chavez would be able to overcome his illness.Even the state newspaper Correo del Orinoco referred to the possibility of a new election in its Monday edition. The top headline, published before Chavez’s announced return, reported on a survey by the pollster Hinterlaces that showed Vice President Nicolas Maduro with a double-digit lead over opposition leader Henrique Capriles if a vote were held.

Chavez hasn’t spoken publicly since before his latest cancer surgery in Cuba on Dec. 11, and critics are questioning whether a leader who has been breathing through a tube and is unable to appear in public is now capable of remaining in office.”This tension isn’t sustainable for much longer. Now that he’s here, they can’t let another 70 days pass for an image to appear or for him to speak,” Bacalao said. “There has to be a convincing response because people are waiting for an outcome.”Chavez’s political allies have left open the possibility that the president may finally take the oath of office, a ceremony originally scheduled for last month. But they have given few precise details about his cancer or what sort of “complex and tough” treatment he is undergoing.

Aides and politicians in Chavez’s camp have said he should be given as much time as he needs to recover.”We can’t demand anything more of Chavez. Now we have to see how we can help more, being more efficient, more productive,” Aragua state Gov. Tareck El Aissami said on state television on Tuesday.Bolivian President Evo Morales, a friend and ally of Chavez, made a brief visit to Caracas on Tuesday and arrived at the military hospital together with Maduro. Morales left the hospital later without speaking to reporters.Chavez’s return came less than three days after the government released the first photos of the president in more than two months, showing him in a bed looking bloated and smiling alongside his daughters.

The government has yet to release any images of the president in Caracas. But as soon as his return was announced on Monday, supporters held upbeat street celebrations and set off fireworks.The way the government has played his return seems one more attempt to take advantage of the situation and “keep the government political class in power,” said Jose Vicente Carrasquero, a political science professor at Simon Bolivar University in Caracas.The 58-year-old Chavez was re-elected to a new six-year term in October, and his inauguration, originally scheduled for Jan. 10, was indefinitely postponed by lawmakers despite complaints by the opposition. The Supreme Court upheld the decision and said the president could be sworn in at a later date before the court.

Carrasquero said he sees Chavez’s eventual swearing-in ceremony as an obligation for the government.”Once the swearing-in is performed, in my opinion we’re facing three possible scenarios: one is that the president resigns immediately and elections are called more or less quickly,” Carrasquero said, adding that other possible scenarios would include declaring a temporary, 90-day absence of the president, which could be extended for another 90 days.A third scenario would be the status quo, Carrasquero said, but sooner or later, a new presidential vote seems “inevitable.” He and other analysts say it’s hard to predict how long that might take.

The Venezuelan Constitution says that if a president dies or steps down, a new vote must be called and held within 30 days. Chavez raised that possibility before he left for Cuba in December by saying that if necessary, Maduro should run in a new election to replace him.Asked about Chavez’s return, U.S. State Department spokeswoman Victoria Nuland noted the possibility of a new vote.”It is obviously a matter for Venezuelans to decide how the transition is going to take place,” Nuland told reporters in Washington on Tuesday. She said “we would hope that that election would be free and fair and balanced,” and that there would be open media access.

On Monday night, Maduro and other Cabinet ministers held hands and prayed in a televised gathering where a priest and a minister offered words of thanks for Chavez’s return.”He will live and he will triumph,” Maduro said earlier while leading a Cabinet meeting on Monday night. As the meeting ended, on television an image of Chavez’s face was superimposed on the oval-shaped table.Officials have confirmed that Chavez is breathing through a tracheal tube, but it’s unclear if he is breathing on his own or is relying on a ventilator.”It is possible that he has a tracheostomy without being ventilator-dependent, although it isn’t clear why that would be the case,” said Dr. Steve Hahn, a professor of radiation oncology at the University of Pennsylvania’s Perelman School of Medicine.

Hahn, who is not involved in Chavez’s treatment, said swallowing usually becomes difficult, though not impossible, for patients who have undergone the procedure and have a hole in the windpipe.The alternatives for patients who can no longer swallow include a tube coming out of the stomach or the nose, or intravenous feeding, Hahn said. “The patient may not be receiving IV fluids or antibiotics, although they often are.”Hahn said that given Chavez’s treatment regimen and evolution, he could have a low-grade sarcoma that is continuing to come back.”It certainly sounds like he is receiving palliative chemotherapy,” Hahn said. “It does sound as if his situation is incurable and most likely end-stage.”