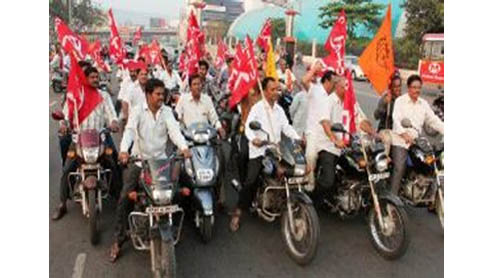 NEW DELHI: The financial and transport sectors are likely to be hit as the nation braces for a two-day strike called by major trade unions protesting against high prices, unemployment and the labour policies.

Industry bodies have estimated a loss of Rs 20,000 crore from the 48-hour strike while trade union leaders have defended their move by saying that “social loses that have accumulated are so huge that we have been compelled to call the strike”.The trade union leaders, who held a meeting with three ministers — labour minister Malikarjun Kharge, defence minister A K Antony and agriculture minister Sharad Pawar – on Monday night, have accused the government of being “totally non-serious” about working out ways for the strike to be called off.

“They had absolutely nothing to offer,” said AITUC general secretary and CPI leader Gurudas Dasgupta who was present at the meeting. “It was clear that the government was not serious in resolving any issue from the fact that the most important minister ( finance minister) P Chidambaram, who was supposed to be present, skipped the meeting,” he added.Blaming the government for anti-people economic policies and price rise, especially fuel, Dasgupta said, “If the government does not meet out demands even after the strike, we will opt for other measures like mass hunger strike, sectoral strikes, long drawn agitations to intensify our protest.”

While he admitted that Delhi has never responded to the strike call in the past, the expectation is not high this time either. He is also sceptical about West Bengal where there could be clashes since the Left is supporting the strike but the Mamata Banerjee government is opposed to it.On Tuesday, a day before the 48-hour strike, Dasgupta said that in coal fields of West Bengal, Jharkhand and Odisha, the contract labour at the mines had already gone on strike. – TOI